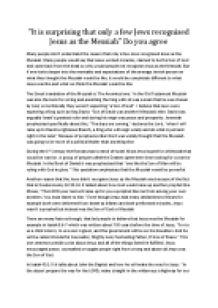 ﻿?It is surprising that only a few Jews recognised Jesus as the Messiah? Do you agree Many people don?t understand the reason that only a few Jews recognised Jesus as the Messiah. Many people would say that Jesus worked miracles, claimed to be the Son of God and came back from the dead so why would people not recognise Jesus as the Messiah. But if one looks deeper into the mentality and expectations of the average Jewish person on what they thought the Messiah would be like, it would be completely different to what Jesus was like and what we think the Messiah would be like. The Greek translation of the Messiah is ?The Anointed one.? In the Old Testament Messiah was also the term for a King and anointing the King with oil was a mark that he was chosen by God, so technically they weren?t expecting ?a Son of God?. ...read more.

In the Book of Daniel it was prophesised that ?one like the Son of Man will be ruling with God in glory.? This quotation emphasises that the Messiah would be powerful. Another reason that the Jews didn?t recognise Jesus as the Messiah was because of the fact that in Deuteronomy 18:15-18 it talked about how God would raise up another prophet like Moses, ?The LORD your God will raise up for you a prophet like me from among your own brothers. You must listen to him.? Even though Jesus had many similarities to Moses for example both were delivered from death as infants and both performed miracles, Jesus wasn?t a prophet but instead was the Son of God or Messiah. There are many factors though, that led people to believe that Jesus was the Messiah for example in Isaiah 9:6-7 which was written about 700 years ...read more.

Psalm 22 foreshadowed Christ?s suffering before his death it talked about how the Romans gambled for his clothes, ?They divide my garments among them and cast lots for my clothing?. Then it talks about how they crucified Christ, ?they have pierced my hands and my feet?. I believe that this Psalm alone prophecies so much about the end of Christ?s life. In conclusion I believe that it isn?t surprising that not all the Jews recognised Jesus as the Messiah, personally I don?t believe that I would recognise him as the Messiah to start with. Also at the time of Jesus there was another miracle worker called Honi the Circle Drawer. Even though Jesus did many spectacular things for example calming storms, bringing people back from the dead and feeding five thousand people with a couple loaves and a few fish people were expecting a different Messiah not a humble carpenter but someone royal or aristocratic. ...read more.