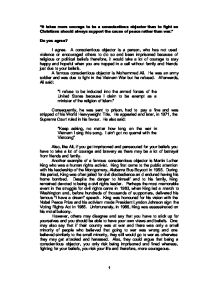 &quot;It takes more courage to be a conscientious objector than to fight so Christians should always support the cause of peace rather than war.&quot;

“It takes more courage to be a conscientious objector than to fight so Christians should always support the cause of peace rather than war.”

I agree.  A conscientious objector is a person, who has not used violence or encouraged others to do so and been imprisoned because of religious or political beliefs therefore, it would take a lot of courage to stay happy and hopeful when you are trapped in a cell without family and friends just due to your beliefs.

A famous conscientious objector is Mohammed Ali.  He was an army soldier and was due to fight in the Vietnam War but he refused.  Afterwards, Ali said:

"I refuse to be inducted into the armed forces of the United States because I claim to be exempt as a minister of the religion of Islam."

Consequently, he was sent to prison, had to pay a fine and was stripped of his World Heavyweight Title.  He appealed and later, in 1971, the Supreme Court ruled in his favour.  He also said:

“Keep asking, no matter how long on the war in Vietnam I sing this song.  I ain't got no quarrel with the Vietcong”

Also, like Ali, if you get imprisoned and persecuted for your beliefs you have to take a lot of courage and bravery as there may be a lot of betrayal from friends and family.

Another example of a famous conscientious objector is Martin Luther King who was a human rights activist.  King first came to the public attention with his leadership of the Montgomery, Alabama Bus Boycott in 1955.  During this period, King was often jailed for civil disobedience and endured having his home bombed.  Despite the danger to himself and to his family, King remained devoted to being a civil rights leader.  Perhaps the most memorable event in the struggle for civil rights came in 1963, when King led a march to Washington and, before hundreds of thousands of supporters, delivered his famous “I have a dream” speech.  King was honoured for his vision with the Nobel Peace Prize and his activism made President Lyndon Johnson sign the Voting Rights Act in 1965.  Unfortunately, in 1968, King was assassinated on his motel balcony.

However, others may disagree and say that you have to stick up for yourselves and you should be able to have your own views and beliefs.  One may also say that if their country was at war and there was only a small minority of people who believed that going to war was wrong and one believed similarly to the small minority, they still would go to war as otherwise they may get attacked and harassed.  Also, they could argue that being a conscientious objector, you only risk being imprisoned and fined whereas, fighting for your beliefs, you risk your life and therefore, more courageous.

Also, people could argue that Christians should not always support the cause of peace rather than war as there was an occasion in the gospels when Jesus was angry:

Early in the morning, as he was on his way back to the city, he was hungry.  Seeing a fig-tree by the road, he went up to it but found nothing on it except leaves.  Then he said to it, “May you never bear fruit again!”  Immediately the tree withered.

Additionally, one might say that they would rather fight with honour for their country rather than just sitting down and watching their country get destroyed.

Also, people may be scared to “love their neighbour” because if they did, they may get treated as an outcast in their society.

Nevertheless, I believe that my views are more convincing because if people of today’s society do not support the cause of peace, there would only be violence and this would only lead to more violence.  Also, the Bible teaches:

Additionally, people feel that it takes more courage to support the war and therefore they support it before, during and after.  People could for example, before the war, protest peacefully and during the war, send in relief aid.

Also, they could believe that they are doing the right thing by being a conscientious objector as there have been so many in the past such Mahatma Gandhi, Martin Luther King, Franz Jagerstätter and Bertrand Russell.