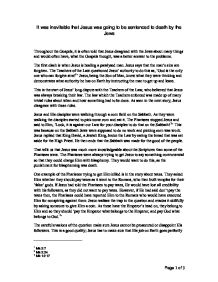 It was inevitable that Jesus was going to be sentenced to death by the Jews. Throughout Marks Gospel there are clues that Jesus was always outsmarting the Jewish authorities. Although he was a Jew himself, he did not agree with the laws of Judaism or

It was inevitable that Jesus was going to be sentenced to death by the Jews Throughout the Gospels, it is often told that Jesus disagreed with the Jews about many things and would often have, what the Gospels thought, was a better answer to the problems. The first clash is when Jesus is healing a paralysed man. Jesus says that the man's sins are forgiven. The Teachers of the Law questioned Jesus' authority to do this as, 'God is the only one who can forgive sins!1' Jesus, being the Son of Man, knew what they were thinking and demonstrates what authority he has on Earth by instructing the man to get up and leave. This is the start of Jesus' long dispute with the Teachers of the Law, who believed that Jesus was always breaking their law. The law which the Teachers enforced was made up of many trivial rules about when and how something had to be done. As seen in the next story, Jesus disagrees with these rules. Jesus and His disciples were walking through a corn field on the Sabbath. As they were walking the disciples started to pick some corn and eat it. ...read more.

During His time on Earth, Jesus does some very controversial things which either make people like Him or hate Him. One of the first reported things he does is to eat with 'sinners'. When the Pharisees arrive to reprimand Jesus, they ask why he is eating with such 'outcasts'. Jesus responds, 'People who are well do not need a doctor, but only those who are sick. I have not come to call respectable people, but outcasts4.' This shows that Jesus wants to save the people who need saving, rather than those who don't. The Pharisees do not believe in that as they believe that people with a disability or illness have 'sinned' and so this justifies them being ill. Jesus, on the other hand, believes all people can be saved if they truly have faith and want to be free from their sins. (This can be seen at Church services particularly at Baptism and Confirmation where they repent 'the sins that separate us from God and neighbour5'). At times during the Gospel, Jesus prophesised His death to His disciples three times. Each time he prophesised he grew stronger and more courageous to face His death, until just before His arrest where he prayed that 'he might not have to go through that time of suffering6'. ...read more.

He would tell them where Jesus was and they would give Him money for doing so. Throughout Mark's Gospel there are clues that Jesus was always outsmarting the Jewish authorities. Although he was a Jew himself, he did not agree with the laws of Judaism or the ways Judaism had changed itself during the Roman occupation of Palestine. Jesus thought that they authorities should stop letting money-changers into the Temple and there are many other examples. It could be said that originally it would not have been inevitable for Jesus' sentencing to death had he not have lived His life the way he had. If he had accepted His faith for what it was then the authorities would have never come across Him and wanted Him dead. But being the Son of God, it was His duty to save the world from its sins and the only way he could do that was by dying for us. Had the Jewish authorities not sentenced Him, He would not have died for us and so we would still be sinners. From the beginning of his mission Jesus knew what He had to do to save the world and he accepted it as His responsibility. 1 Mk 2:7 2 Mk 2:24 3 Mk 12:17 4 Mk 2:17 5 http://www.cofe.anglican.org/ 6 Mk 14:35 Page 1 of 4 Page 1 of 4 ...read more.