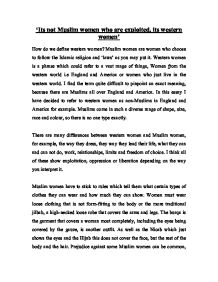 Its not muslim women that are exploited its western women

'Its not Muslim women who are exploited, its western women' How do we define western women? Muslim women are women who choose to follow the Islamic religion and 'laws' as you may put it. Western women is a phrase which could refer to a vast range of things, Women from the western world i.e England and America or women who just live in the western world. I find the term quite difficult to pinpoint an exact meaning, because there are Muslims all over England and America. In this essay I have decided to refer to western women as non-Muslims in England and America for example. Muslims come in such a diverse range of shape, size, race and colour, so there is no one type exactly. There are many differences between western women and Muslim women, for example, the way they dress, they way they lead their life, what they can and can not do, work, relationships, limits and freedom of choice. I think all of these show exploitation, oppression or liberation depending on the way you interpret it. Muslim women have to stick to rules which tell them what certain types of clothes they can wear and how much they can show. Women must wear loose clothing that is not form-fitting to the body or the more traditional jilbab, a high-necked loose robe that covers the arms and legs. ...read more.

In more than one way, some Muslim women live in fear of men and have no choice but to do what they are told, what Allah and Muhammad taught. Due to the fact that women in Islam wear the Nicab, Hijab or the burqa, they are often mistaken for not being free, even if they wear them as a choice. Today, though you don't find western women being told they don't look free because of the way they dress and how they choose to live their life. Models; women who are liberated or oppressed? They can be considered liberated because no-one can make them show their body but oppressed in the sense they get paid for it and attract attention to themselves. There is a pressure in society to look the way models do, skinny and perfect with lots of make-up and usually fairly revealing clothes. I think this would be evidence that the statement/title is true because Muslims do not have to worry about showing their bodies for money and being models. Another difference between western and Muslim women is the aspects of marriage and family. In Islam, it is a social necessity because through marriage, families are established and the family is the fundamental unit of theirr society. ...read more.

I think that in western society, family can be well-structured but unlike Muslim society, a family may come as a surprise because of accidental pregnancies etc, which are extremely rare in Islam. With family comes motherhood, mothers in Islam are treated completely different compared to western women. Apart from maternity leave and being more careful around in the street, western women, I feel are not treasured as much as Muslims are. The honour, respect and esteem that come with motherhood, pregnancy and child birth, in Islamic culture, is beyond compare, I think they are looked upon in a totally different manner. In conclusion, looking over the evidence I have given, I feel that the statement has aspects that would make it false but more aspects that would consider it true. Western women are able to be mostly equal to men; they have a mind of their own, and do not usually need permission from a male relative to do something. They are exploited to be used for personal gain in many areas such as using their body for publicity and money. I know I have written about the cultural differences between Western and Muslim society, I can not really think of a reason how Muslims are exploited except prejudice and them being both liberated and oppressed. Lastly, I just think that Islam is a way of life and people should not be judged for this decision to live their life a certain way. ?? ?? ?? ?? ...read more.