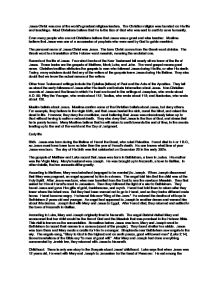 Jesus Christ was one of the world's greatest religious leaders.

Jesus Christ was one of the world's greatest religious leaders. The Christian religion was founded on His life and teachings. Most Christians believe that He is the Son of God who was sent to earth to save humanity. Even many people who are not Christians believe that Jesus was a great and wise teacher. Muslims believe that Jesus was one of a succession of prophets who were sent by God to guide mankind. The personal name of Jesus Christ was Jesus. The term Christ comes from the Greek word christos. The Greek word is a translation of the Hebrew word messiah, meaning the anointed one. Records of the life of Jesus. Four short books of the New Testament tell nearly all we know of the life of Jesus. These books are the gospels of Matthew, Mark, Luke, and John. The word gospel means good news. Christian tradition attributes the gospels to men who followed Jesus during His life, or after His death. Today, many scholars doubt that any of the writers of the gospels knew Jesus during His lifetime. They also doubt that we know the actual names of the writers. Other New Testament writings include the Epistles (letters) of Paul and the Acts of the Apostles. They tell us about the early followers of Jesus after His death and include information about Jesus. Non-Christian records of Jesus and the times in which He lived are found in the writings of Josephus, who wrote about A.D. 90; Pliny the Younger, who wrote about 112; Tacitus, who wrote about 115; and Suetonius, who wrote about 120. Muslim beliefs about Jesus. Muslims confirm some of the Christian beliefs about Jesus, but deny others. For example, they believe in the virgin birth, and that Jesus healed the sick, cured the blind, and raised the dead to life. However, they deny the crucifixion, most believing that Jesus was miraculously taken up to God without having to suffer a natural death. ...read more.

His teaching. In addition to proclaiming the Kingdom of God by His miracles, Jesus also proclaimed it by His teaching. Jesus often used parables to explain the Kingdom of God. Parables are brief stories that teach lessons. One of Jesus' well-known parables, The Prodigal Son, is found in Luke 15:11-32. The parable describes a father's great joy at the return of his wayward son. Jesus used this story to teach God's love and forgiveness for sinners who repent. Jesus also told His followers what kind of life they would have to live in the Kingdom of God. He taught people to love God and their neighbours. Jesus stressed that each person should treat others as he or she wished to be treated. He also instructed His listeners not to fight back if they were attacked. He commanded, "Whosoever shall smite thee on thy right cheek, turn to him the other also" (Matt. 5:39). The Passion Jesus' proclamation of the Kingdom of God was good news for many people. But some, especially the leaders of the people, were unhappy with Him. They believed that Jesus changed accepted religious practices, such as the Sabbath laws. But most of all, the leaders feared that His popularity would encourage a rebellion against the Roman Empire. Then the Romans would destroy the Jewish nation. Jesus probably knew that it was dangerous to carry out His ministry. But He considered His ministry to be His duty. He was determined to preach the good news of the Kingdom of God. Jesus felt that He had come to save other people by giving His own life. The Passion is a term used to indicate Jesus' suffering during the final days of His life. Christians remember these final days during Holy Week. The Last Supper. Jesus arrived in Jerusalem for Passover week. He made a triumphal entry into the city. People cheered Him and covered His path with clothing and the branches of palm trees. They were grateful for His teaching and healing. ...read more.

Where did He die? Who were (1) Pontius Pilate? (2) Judas Iscariot? What does the name Jesus Christ mean? What were two miracles that Jesus performed? What did Jesus tell His apostles at the Last Supper? Who baptized Jesus? What were (1) the Nativity? (2) the Passion? Where was Jesus arrested? Why was Jesus' Resurrection important to His early followers? Additional Resources LEVEL I Brown, Stephen. Christianity. Facts on File 1991. A detailed overview of the origins, organisation, and customs of Christian religions. The Jesus Expedition: Making Discoveries About Jesus Through his Miracles. David C. Cook, Elgin, Illinois, U.S.A., 1996. De Paola, Tomie. The Miracles of Jesus. Holiday 1987. The Parables of Jesus. 1987. For younger readers. LEVEL II Crossan, John Dominic. The Historical Jesus: The Life of a Mediterranean Jewish Peasant. Harper Collins 1992. A life of Jesus written from historical, literary, and anthropological perspectives. Fredriksen, Paula. From Jesus to Christ: The Origins of the New Testament Images of Jesus. Yale 1988. Describes Jesus as a historical figure. Jesus' Jewishness: Exploring the Place of Jesus Within Early Judaism. Ed. by James H. Charlesworth. Crossroad 1991. A collection of essays by Jewish and Christian authors. Johnson, Sherman E. Jesus and His Towns. Glazier 1989. Describes the towns of Nazareth, Capernaum, and Chorazin, and the Gospel stories that took place in them. Mitchell, Stephen. The Gospel According to Jesus: A New Translation and Guide to His Essential Teachings for Believers and Unbelievers. Harper Collins 1991. The teachings on forgiveness and unconditional love are presented as the core of the Gospel according to Jesus. Pelikan, Jaroslav. Jesus Through the Centuries: His Place in the History of Culture. Yale 1985. Survey traces changing conceptions of Christ from biblical through modern times. Stanton, Graham. The Gospels and Jesus. Oxford 1989. Examines the history and theology presented by the writers of the four Gospels. Watson, Alan. Jesus and the Jews: The Pharisaic Tradition in John. University of Georgia Press, Athens, Georgia, U.S.A., 1995. ---- end of article ---- ...read more.