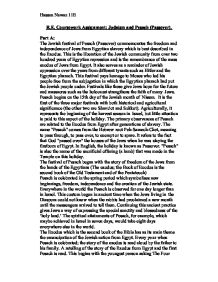 R.E. Coursework Assignment: Judaism and Pesach (Passover). Part A: The Jewish festival of Pesach (Passover) commemorates the freedom and independence of Jews from Egyptian slavery which is best described in the Exodus. This is the liberation of the Jewish community from over two hundred years of Egyptian repression and is the remembrance of the mass exodus of Jews from Egypt. It also serves as a reminder of Jewish oppression over the years from different tyrants such as Hitler and the Egyptian pharaoh. This festival pays homage to Moses who led his people free from the subjugation in which the Egyptian pharaoh had put the Jewish people under. Festivals like these give Jews hope for the future and massacres such as the holocaust strengthens the faith of many Jews. Pesach begins on the 15th day of the Jewish month of Nissan. It is the first of the three major festivals with both historical and agricultural significance (the other two are Shavu'ot and Sukkot). Agriculturally, it represents the beginning of the harvest season in Israel, but little attention is paid to this aspect of the holiday. The primary observances of Pesach are related to the Exodus from Egypt after generations of slavery. The name "Pesach" comes from the Hebrew root Peh-Samech-Chet, meaning to pass through, to pass over, to exempt or to spare. It refers to the fact that God "passed over" the houses of the Jews when he was slaying the firstborn of Egypt. In English, the holiday is known as Passover. "Pesach" is also the name of the sacrificial offering (a lamb) that was made in the Temple on this holiday. The festival of Pesach began with the story of freedom of the Jews from the hands of the Egyptians (The exodus; the Book of Exodus is the second book of the Old Testament and of the Pentateuch) Pesach is celebrated in the spring period which symbolises new beginnings, freedom, independence and the creation of the Jewish state. ...read more.

Haroseth. 2. Parsley (dipped in salt water.) 3. Roasted egg. 4. Shank Bone. 5. Bitter herbs. The Haroseth is a sweet mixture of chopped walnuts, wine, cinnamon and apples that represents the mortar the Jewish slaves used to assemble the Pharaoh's bricks. It makes Jews think about the sweetness of their freedom. The parsley symbolises springtime, it is dipped in salt water to remind Jews of the tears of the Jewish slaves when they suffered so much in the hands of the Egyptians. A green vegetable that is called Karpas in Hebrew can also be used. Normally parsley or lettuce are used, whose greenness is a reminder that Pesach is a spring festival. The egg, which is boiled or roasted, is another symbol of spring and new beginnings. It is a traditional symbol of mourning. This is not eaten and also symbolises the burnt offerings once made in the temple. They are a symbol of new life. It recalls the destruction of the temple by the Romans also. The shank bone is symbolic of the sacrificial lamb offering; the bone can come from whatever the family is eating, such as the leg bone of a roasted turkey. The shank bone is used because it also symbolises that Israel's salvation was with 'an outstretched arm.' The bitter herbs, usually horseradish which has a taste so strong, that it makes the eyes water, reminds Jews of the bitterness and affliction of slavery. During the Seder 4 glasses of wine are poured to represent the 4 stages of the exodus 1. freedom 2. deliverance 3. redemption 4. release A fifth cup of wine is poured and placed on the Seder table. This is the Cup of Elijah, an offering for the Prophet Elijah. During the Seder the door to the home is opened to invite the prophet Elijah in After the meal is eaten, the children search for the Afikomen. The Seder is finished when the children have found the Afikomen and everyone has eaten a piece. ...read more.

Another way in which Jews can be educated is by learning from the teachings they receive from the rabbi. They can learn and act upon these teachings and spread this knowledge to others maybe to reform Jews. One of the most obvious ways of learning about faith and religion is by learning from family and parents. One of the most important duties a parent (mother mostly) can do for their child is to educate them in the ways of Judaism. The mother is chiefly responsible for teaching her children. Jews learn from the rituals and traditions of Judaism in the home. They watch the mother prepare for such events as Shabbat and then open the weekly festival by lighting two candles and saying a blessing over them. By setting a good example a mother is expected to strengthen the family's religious life and commitment. The father also has a responsibility for setting a good example and acting as role model for his children, and addition he is required to teach them how to lead useful lives of their own. The Talmud carries a stark warning to all Jewish fathers: "he who does not teach his son a trade is as though he taught him to be a robber." The importance placed on parents teaching their children is set out in the Shema: "never forget these commands that I am giving you today. Teach them to your children." In my opinion I think both factors contribute in the education of Jews, although I think if you are interested in your religion you would find other means of answering your curiosity on your faith. However I do think that if you a reform Jew, festivals are a great way of learning about the faith, teachings and history of Judaism. It is also a good way to know more about who you are and more about your own identity. THE FESTIVAL OF PESACH BY HASSAN NAWAZ CANDIDDATE NUMBER: 4118 CENTRE NUMBER: 20568 Resources used. Mrs Mouzer, Miss Hill, Miss Newsome- Reform Jew, BBC Documentary on Judaism and the festival of Pesach. Hassan Nawaz 11E ...read more.