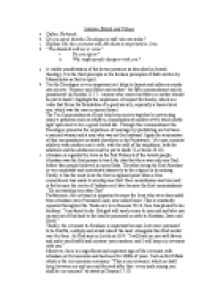 Judaism Beliefs and Values a. Define Shekinah. b. Do you agree that the Decalogue is still relevant today?

﻿Judaism Beliefs and Values 1. Define Shekinah. 2. Do you agree that the Decalogue is still relevant today? 3. Explain why the covenant with Abraham is important to Jews. 4. ?The Messiah will never come?. 1. Do you agree? 2. Why might people disagree with you? 1. A visible manifestation of the divine presence as described in Jewish theology. It is the third principle in the thirteen principles of faith written by Maimonides as God is spirit. 2. Yes the Decalogue is very important as it helps to layout and enforces morals into society. ?Honour your father and mother? the fifth commandment and its punishment (in Exodus 21:17- ?anyone who curses his father or mother should be put to death?) highlight the importance of respect for family, which is a value that forms the foundation of a good society, especially a hierarchical one, which was the case in ancient Israel. The Ten Commandments if kept help keep society together by preventing many a problems such as adultery, commandment number seven which sheds light upon how to live a good Jewish life. ...read more.

I will keep my covenant with you.? Moreover, there is a significant and important sign of the covenant with Abraham is Circumcision and has been for 1000s of years. Such as Brit Milah which is the circumcision ceremony. ?This is my covenant, which ye shall keep, between me and you and thy seed after thee: every male among you shall be circumcised? as stated in Genesis 17:10. In addition, simplicity of the covenant was important as all the Jewish people had to do was worship God and he would take care of other matters. This can be interpreted in Genesis 15:1- ?Do not be Afraid, Abram. I am your shield, your very great reward.? This sheds light on how God gives more then he gains as he asks for one thing ? for Abraham not to be afraid then in return gives him shield and reward. Still, there is a lot of importance in Abrahams covenant with God because it is evidence that God is keeping promise. ...read more.

Also the Torah contains no specific reference to a Messiah, where as it does mention ?End of days?, which is the time of the Messiah. Furthermore, my reasons to believe the ?Messiah will never come? are imbedded because over centuries there have been false claims of a Messiah. For example, Shabbatai Tzvi, a 17th centaury man who claimed to be the Messiah. This greatly influenced progressive Judaism to think of the Messianic age, rather than a person. On the other hand, people may disagree with me and believe as do Orthodox Jews that God will send a person to be the Messiah some time in the future. As is a basic, fundamental part of traditional Judaism and is part of the thirteen principles of faith. In principle 12 ? God will send a Messiah. Additionally, Orthodox Jews regard the Tenakh as coming from God, and to be taken literally. The Tenakh gives several specifications as to who the Messiah will be. He will be a descendent of King David (2 Samuel 7:12-13; Jeremiah 23:5), observant of Jewish law (Isaiah 11:2-5), a righteous judge (Jeremiah 33:15), a great military leader. ...read more.