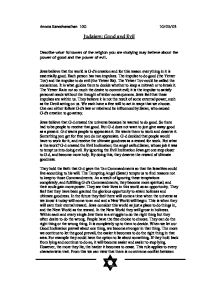 Judaism: Good and Evil - Describe what followers of the religion you are studying may believe about the power of good and the power of evil.

Aneeta Kaneshanathan 10G 10/05/03 Judaism: Good and Evil Describe what followers of the religion you are studying may believe about the power of good and the power of evil. Jews believe that the world is G-d's creation and for this reason everything in it is essentially good. Each person has two impulses. The impulse to do good (the Yetzer Tov) and the impulse to do evil (the Yetzer Ra). The Yetzer Tov could be called the conscience. It is what guides them to decide whether to keep a mitzvah or to break it. The Yetzer Ra is not so much the desire to commit evil; it is the impulse to satisfy personal needs without the thought of wider consequences. Jews feel that these impulses are within us. They believe it is not the result of some external power, such as the Devil acting on us. We each have a free will to act in ways that we choose. One can either follow G-d's law or rebel and be influenced by Satan, who caused G-d's creation to go astray. Jews believe that G-d created the universe because he wanted to do good. So there had to be people to receive that good. But G-d does not want to just give away good as a present. G-d wants people to appreciate it. He wants them to work and deserve it. Something you get for free you do not appreciate. G-d decided that people would have to work for it, and receive the ultimate goodness as a reward for work. ...read more.

'HASHEM G-d took the man and placed him in the Garden of Eden, to work it and to guard it. And HASHEM G-d commanded the man, saying, ' Of every tree of the garden you may freely eat, but of the Tree of Knowledge of Good and Bad, you must not eat thereof; for on the day you eat of it, you shall surely die.' (Genesis 2:15-17) 'Now the serpent was cunning beyond any beast of the field that Hashem G-d had made. He said to the woman, ' Did perhaps, G-d say: "You shall not eat of any tree of the garden"?' The woman said to the serpent, 'Of the fruit of any tree of the garden we may eat. Of the fruit of the tree which is the centre of the garden G-d has said: "You shall neither eat of it nor touch it, lest you die."' The serpent said to the woman, ' You will not surely die; for G-d knows that on the day you eat of it your eyes will be opened and you will be like G-d, knowing good and bad.' And the woman perceived that the tree was good for eating and that it was a delight to the eyes, and that the tree was desirable as a means to wisdom, and she took of its fruit and ate; and she gave also to her husband with her and ate. (Genesis 3:1- 6 ) ...read more.

They lay down in front of the dead or wounded people; some caressed those who were still alive and spoke to them in a low voice." * What have these innocent people done to deserve this treatment? How can this make their faith grow stronger in God? They most likely believed that there was no God in existence. * If God oversees evil why did he not stop the Holocaust sooner? This shows that there is no God. * If the Holocaust is a test it is cruel. If God were good then why would he create such a test? Even if some people pass the test, especially because they and their loved ones did not feel the worst kind of suffering and misery, that does not make the test fair for those who do suffer in that way, whether they pass or not. Little babies possibly don't even have a chance to pass the test before they die. The testing is hardly fair in order to test other people. Many try to answer the question, which is more powerful good or evil? In Judaism they do not believe there is a conflict between good and evil. Some religions believe that there are two forces in the universe, one good and one evil, and that they are constantly at war with each other. Judaism sees it differently. They believe Satan is not a rebellious angel as God created both good and evil. They believe this as the Bible says so in Isaiah 45:7. 'I form the light, and create darkness: I make peace, and create evil: I the LORD do all these things.' (Isaiah 45:7) ...read more.