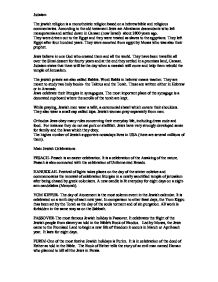 The jewish religion is a monotheistic religion based on a hebrew bible and religious commentaries. According to the old testament Jews are Abrahams descendants who left mesopotamia and settled down in Canaan (now Israel)  about 3800 years ago.

They were driven out to the Egypt and they were treated as slaves to the egyptians. They left Egypt after four hundred years. They were escorted from egypt by Moses who was also their prophet.

Jews believe in one God who created them and all the world. They have been travellin all over the Sinai dessert for fourty years and at the end they settled in a promises land, Canaan.

Judaism states that there will be the day when a messiah will come and help them rebuild the temple of Jerusalem.

The jewish priests are also called Rabbis. Word Rabbi in hebrew means teacher. They are meant to study two holy books- the Talmus and the Torah. These are written either in Hebrew or in Aramaic.

Jews celebrate their liturgies in synagogues. The most important place of the synagoge is a decorated cup board where the scrolls of the torah are kept.

Orthodox Jews obey many rules concerning their everyday life, including dress code and food.  For instance they do not eat pork or shellfish. Jews have very strongly developed sense for family and the laws which they obey.

The highes number of Jewish supporters nowadays lives in USA (there are several millions of them).

HANUKKAH- Festival of lights takes places on the day of the winter colstice and commemorates the renewal of celebration liturgies in a newly sanctified temple of jerusalem after being chased by greek colonisers. A new candle is lit everyday for eight days on a eight-arm candelabra (Menorah).

YOM KIPPUR- The day of Atonement is the most solemn event in the Jewish calendar. It is celebrated on a tenth day of each new year. In comparison to other feast days, the Yom Kippu rhas been set by the Torah as the day of the souls torment and of sin purgation. All work is forbidden in the same way as on the Sabbath.

PASSOVER-The most famous Jewish holiday is Passover. It celebrates the flight of the Jewish people from slavery as told in the Bible's Book of Exodus.   Led by Moses, the Jews came to the Promised Land to begin a new life of' freedom it occurs in March or April each year.  It lasts for eight days.

PURIM-One of the most festive Jewish holidays is Purim.  It is in celebration of the deed of Esther as told in the Bible.  The Book of Esther tells the story of an evil man named Haman who planned to kill all the Jews in Persia.

There are about 13-14 million Jews in the world.

HALAKHAH-  The word halakhah  is usually translated as Jewish Law. Judaism is not just a set of belief about God man and the universe. Judaism is a comprehensive way of life, filled with rules and practices that affect every aspect of life: what you do when you wake up in the morning, what you can and cannot eat, what you can and cannot wear, how to groom yourself, how to conduct business, who you can marry, how to observe the holidays and Sabbat , and perhaps most important, how to treat God , other people, and annimals, This set of rules and practices is known as halakhah.

RABBI- Rabbi, on the other hand, has no more authority to perform rituals than any other adult male member of the Jewish community. Rabbi is simply a teacher, a person sufficiently educated in hhalakhah.

GABBAI- A gabbai is a lay person who volunteers to perform various duties in connection with Torah reading at religious services.