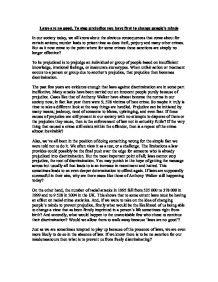 Laws are no good. To stop prejudice you have first to change people's minds In our society today, we all know about the obvious consequences that come about for certain actions; murder leads to prison time as does theft, perjury and many other crimes. But as it now come to the point where for some crimes these sanctions are simply no longer effective? To be prejudiced is to prejudge an individual or group of people based on insufficient knowledge, irrational feelings, or inaccurate stereotypes. When unfair action or treatment occurs to a person or group due to another's prejudice, that prejudice then becomes discrimination. ...read more.

If the very thing that caused a crime still exists within the offender, then is a repeat of the crime almost inevitable? Also, we've all been in the position of doing something wrong for the simple fact we were told not to do it. We often view it as a test, or a challenge. The limitations a law provides could possibly be the final push over the edge for someone who is already prejudiced into discrimination. But the most important point of all; laws cannot stop prejudice, the root of discrimination. You may punish in the hope of getting the message across but usually all that leads to is an increase in resentment and hatred. ...read more.

Would we allow them to walk away because 'laws are no good'? Just as we are sometimes tempted to play up because of the presence of laws, we are even more likely to do so in the absence of law. If we know there is to be no sanction for our misdemeanours then what is to prevent us from freely discriminating? Personally, I believe both that laws are good and that people's minds must be changed to stop prejudice. Laws can not solely eradicate the existence of discrimination neither can an attempt to change people's minds. Both methods must be used effectively together to change people's outlook. They must also be consistent if there is to be any hope of convincing generations full of prejudice that neither prejudice nor discrimination is the way forward. ?? ?? ?? ?? ...read more.