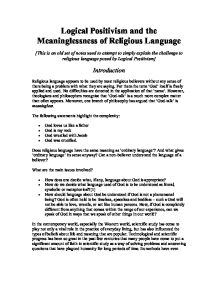 Logical Positivism and the Meaninglessness of Religious Language.

Logical Positivism and the Meaninglessness of Religious Language [This is an old set of notes used to attempt to simply explain the challenge to religious language posed by Logical Positivism] Introduction Religious language appears to be used by most religious believers without any sense of there being a problem with what they are saying. For them the term 'God' itself is freely applied and used. No difficulties are detected in the application of that 'name'. However, theologians and philosophers recognise that 'God-talk' is a much more complex matter than often appears. Moreover, one branch of philosophy has argued that 'God-talk' is meaningless. The following statements highlight the complexity: * God loves us like a father * God is my rock * God wrestled with Jacob * God was crucified. Does religious language have the same meaning as 'ordinary language'? And what gives 'ordinary language' its sense anyway? Can a non-believer understand the language of a believer? What are the main issues involved? * How does one decide what, if any, language about God is appropriate? * How do we decide what language used of God is to be understood as literal, symbolic or metaphorical?[1] * How should language about God be understood if God is not a phenomenal being? God is often held to be timeless, spaceless and bodiless - such a God will not be able to love, wrestle, or act like human persons. How, if God is completely different from anything that comes within the range of our experience, can we speak of God in ways that we speak of other things in our world? ...read more.

In other words, Flew challenges the believer to specify what would count as a falsification of her religious claims; and he argues that if nothing could then the claims are vacuous. On the one hand, Flew's suggestions could possibly free the LP challenge from its narrow conception of experience as sense experience that can potentially be verifiable, to include more general types of experience and language that can be falsifiable. For e.g., whereas the 'strong' VP has problems with statements of love (since they cannot strictly be verified), the FP can include them by asking negatively what type of conditions would falsify the statement that 'Romeo and Juliet were greatly in love'. --- However, critics have recognised that what Flew really wants is some set of empirically observable conditions which would falsify theological assertions.[3] --- In Flew's parable, is it really unreasonable to argue for the existence of a gardener who tends that plot when it is perfectly possible to notice how extremely odd that piece of land is when compared to its surroundings? --- The sceptic and the believer do not disagree, in Flew's parable, on what counts as evidence, but only on what counts as a proper/legitimate interpretation of that evidence. Does that mean that there is not a possible 'true' or 'false', as non-cognitivists advance? And does it mean that either interpretation given is any less rational than the other? Finally, the fact that one reassesses and modifies one's original proposal/hypothesis is surely a reasonable thing to do - unless, of course, there is overwhelming evidence that the general hypothesis is not true. Then, but only then, is it irrational to continue to modify it. ...read more.

While, in some sense the resurrection of Jesus from the dead is not an historical event (it is an eschatological event) a certain understanding of it and its significance would be drastically altered if the, in principle verifiable, empty tomb incident turned out to be a hoax of some kind. Conclusion Logical Positivism was an attempt to take seriously the progresses made in scientific knowledge for the philosophical project. In so doing it intended to purge philosophical thinking and speaking of all that was unworthy of decent philosophical conversation. However, in so summarily and easily dismissing theological statements as meaningless the LPs failed to account for the great variety of the types of religious utterances, which include many other sorts of things than mere statements/factual propositions. As such, when applying itself to the issue of religious language (and also arguably to the whole epistemological and methodological endeavour) Logical Positivism is too simplistic and na�ve. Perhaps, then, to say that statements are not 'factually meaningful' is no more than to say that they do not have meaning in the way that scientific statements have meaning. Viewed in this sort of way, the work of the LPs may be understood as the beginnings of a large task of mapping different sorts of linguistic meaning, and different ways of getting that meaning. The LPs themselves did not see it that way, but in particular the later work of Wittgenstein indicated that Logical Positivism was inadequate and that there was a further programme of work to be done in mapping linguistic meaning. Bultmann believed myths had to be reinterpreted, and he did that existentially. He saw the resurrection not as a history fact, but as a miracle of faith in the lives of the disciples ...read more.