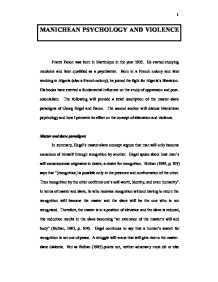 MANICHEAN PSYCHOLOGY AND VIOLENCE Frantz Fanon was born in Martinique in the year 1925. He started studying medicine and later qualified as a psychiatrist. Born in a French colony and later working in Algeria (also a French colony), he joined the fight for Algeria's liberation. His books have exerted a fundamental influence on the study of oppression and post-colonialism. The following will provide a brief description of the master-slave paradigms of Georg Hegel and Fanon. The second section will discuss Manichean psychology and how I perceive its effect on the concept of alienation and violence. Master and slave paradigms In summary, Hegel's master-slave concept argues that man will only become conscious of himself through recognition by another. Hegel spoke about how man's self-consciousness originates in desire, a desire for recognition. Bulhan (1985, p. 103) says that "[recognition] is possible only in the presence and confrontation of the other. Thus recognition by the other confirms one's self-worth, identity, and even humanity". In terms of master and slave, he who receives recognition without having to return the recognition will become the master and the slave will be the one who is not recognised. Therefore, the master is in a position of elevation and the slave is reduced, this reduction results in the slave becoming "an extension of the master's will and body" (Bulhan, 1985, p. ...read more.

The universe in Star Wars is a battlefield between these two forces. Darth Vader can be seen as the colonizer, conquering other worlds, and exploiting the inhabitants of the planets he chooses to dominate. Those who are in support of the Jedi Knights - the light side - are those who are colonized. Darth Vader and his dark side army use violence and manipulation to overpower worlds and ultimately strengthen their force. The light side see the dark side as one of pure corruption; they aim to achieve a balance in the universe by denying the dark side, eradicating the universe of negative emotions. The Jedi Knights make up the liberation army that will fight back against the dark side, using violence when necessary to maintain the balance of the Force. This dualistic view of Star Wars illustrates that Manichean psychology is created by one side oppressing another and that through this oppression emerges violence - violence that reinforces this Manichean psychology. I believe though that through the constant battle between good and evil - in any context - that those who have suffered because of another will reclaim what they lost. Be it their identity, dignity, lost culture, language or history. Unfortunately the Manichean worldview is imprinted in the minds of all human beings and it is this dualism of the world that "underlies human oppression and violence (Bulhan, 1985, p. 144). ...read more.