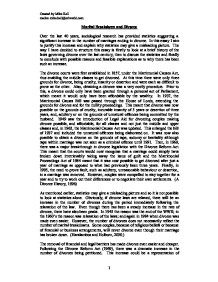 Marital Breakdown and Divorce Over the last 40 years, sociological research has provided statistics suggesting a significant increase in the number of marriages ending in divorce. In this essay I aim to justify this increase and explain why statistics may give a misleading picture. The way I have decided to structure this essay is firstly to look at a brief history of the laws governing divorce over the last century, then to discuss the statistics and finally to conclude with possible reasons and feasible explanations as to why there has been such an increase. The divorce courts were first established in 1857, under the Matrimonial Causes Act, thus enabling the middle classes to get divorced. At this time there were only three grounds for divorce, being cruelty, insanity or desertion and were each as difficult to prove as the other. Also, obtaining a divorce was a very costly procedure. Prior to this, a divorce could only have been granted through a personal act of Parliament, which meant it would only have been affordable by the wealthy. In 1937, the Matrimonial Causes Bill was passed through the House of Lords, extending the grounds for divorce and for the nullity proceedings. This meant that divorce was now possible on the grounds of cruelty, incurable insanity of 5 years or desertion of three years, and, adultery or on the grounds of unnatural offences being committed by the husband. ...read more.

Some couples, because of religious beliefs or because of financial or business arrangements, will never divorce even though their marriage has broken down. (Haralambos and Holborn, 2000.) The removal of financial and legal barriers has made divorce even easier and cheaper. Following the Divorce Reform Act (1969), there was a dramatic increase in the number of divorces being petitioned. This increase could be a representation of people, who were unhappy with their marriage and may have wanted a divorce, but because of the laws governing divorce, were unable to. The change in the law meant that these people were now able to obtain divorce easily and because of the introduction of legal aid in 1949, would have been able to afford it even if they were on a low income. However, the divorce rate continued to rise until it reached a peak in the 1990's when it seems to have stabilized. In 1996 there were around 350,000 marriages and around 160,000 divorces. Joan Chandler suggested, in 1993, that around 40% of all marriages would end in divorce, should trends continue. . (Haralambos and Holborn, 2000.) Another factor that could be a contributor in the increasing divorce rate is that of empty shell marriages. ...read more.

Today, people are demanding more from marriage and are not taking their vows as seriously whereas in the past demands wouldn't have been so high. It has been argued that this could be because we now live in a more secular society and what might have been accepted in the past is now unacceptable and the result is divorce. . (Haralambos and Holborn, 2000.) Michael Anderson has argued that in the past people were marrying later and life expectancy was low. Whereas now, people are getting married younger and life expectancy is high. He says that, in fact, the average length of a marriage today is as it was 30 - 40 years ago, only the high divorce rate reflects the longer potential marriage due to people living longer. . (Haralambos and Holborn, 2000.) In conclusion, there are many factors involved in the increasing divorce rate and explanations are difficult. It seems that in the past, people may have wanted to divorce but because of expense, or legal requirements, they were unable to. Also, society today is a lot less religious than it has been in the past and so the marriage vows are not taken as seriously as they have been. It would be safe to say, however, that the comparison of divorce rates over time, or between countries, is unrealistic because of changes in the law or religious beliefs. ...read more.