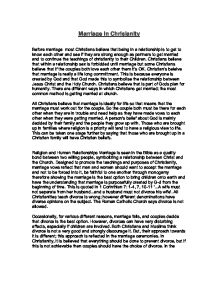 Religion and Human Relationships Marriage is seen in the Bible as a quality bond between two willing people, symbolizing a relationship between Christ and the Church. Designed to promote the teachings and purposes of Christianity, marriage vows reflect that men and women should want to accept the marriage and not to be forced into it, be faithful to one another through monogamy therefore showing the marriage is the best option to bring children onto earth and have the understanding that marriage is purposefully created by G-d from the beginning of time. This is quoted in 1 Corinthian 7: 1-4, 7, 10-11 '...A wife must not separate from her husband...and a husband must not divorce his wife'. ...read more.

In the Roman Catholic Church, if a partner of a failed first marriage wanted to remarry, the second marriage would not be able to be blessed. In Conclusion, Marriage is regarded as being a sacrament; a way in which man can become closer to and specially blessed by God. Marriage is important as it is seen as a reflection of the union between Jesus and Christianity. It is because of this resemblance that divorce is not encouraged, or even accepted in most Christian denominations. Marriage is seen as important for three reasons; it is a loving and caring relationship for people to be part of and means that people can have companionship. The quote, from the Bible, "It is not good that man should be alone" shows the importance of friendship and company in the Christian philosophy. ?? ?? ?? ?? ...read more.