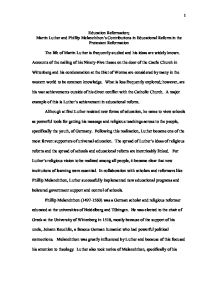 Martin Luther and Phillip Melanchthon's Contributions in Educational Reform in the Protestant Reformation.

Education Reformation; Martin Luther and Phillip Melanchthon's Contributions in Educational Reform in the Protestant Reformation The life of Martin Luther is frequently studied and his ideas are widely known. Accounts of the nailing of his Ninety-Five theses on the door of the Castle Church in Wittenberg and his condemnation at the Diet of Worms are considered by many in the western world to be common knowledge. What is less frequently explored; however, are his vast achievements outside of his direct conflict with the Catholic Church. A major example of this is Luther's achievement in educational reform. Although at first Luther resisted new forms of education, he came to view schools as powerful tools for getting his message and religious teachings across to the people, specifically the youth, of Germany. Following this realization, Luther became one of the most fervent supporters of universal education. The spread of Luther's ideas of religious reform and the spread of schools and educational reform are inextricably linked. For Luther's religious vision to be realized among all people, it became clear that new institutions of learning were essential. In collaboration with scholars and reformers like Phillip Melanchthon, Luther successfully implemented new educational programs and bolstered government support and control of schools. Phillip Melanchthon (1497-1560) was a German scholar and religious reformer educated at the universities of Heidelberg and T�bingen. He was elected to the chair of Greek at the University of Wittenberg in 1518, mostly because of the support of his uncle, Johann Reuchlin, a famous German humanist who had powerful political connections. ...read more.

a priest, tried to destroy the belief that under God's law the human race is divided into two ranks, cleric and lay; the cleric as superior, because they care for the souls while the lay care for the bodies."8 This was not; however, the only social division that Luther had to overcome in promoting education for all. In supporting schooling for all people through the creation of new schools and programs Luther had to fight the period's common attitudes toward education. At this time, many people also viewed society as being separated into two groups besides cleric and lay; "the learned and the 'common man.'" 9 Along these lines, many believed that education was wasted unless one planned on a profession in law, medicine, or the church. Luther's response to these attitudes was that, "the vocation of any Christian, by contributing to society and thus serving one's neighbor, is as fulfilling before God as any specifically religious vocation."10 Schools, in Luther's mind, represented a way to improve a person's abilities and knowledge in everyday life, allowing them to serve others and thereby improve society as a whole. Luther did, however, acknowledge that there existed a distinction between the "learned" and the "common man," and that not everyone was able, or meant to become learned leaders or teachers. In this vein, Luther and Melanchthon suggested that elementary schools, while educating all young boys and girls, could be used as mechanisms in which promising young students could be identified and advanced to elite secondary schools or universities and on to positions of leadership. ...read more.

Luther that the Bible and Christian belief were taught alongside secular subjects, but only to present them to students not to force belief upon them. The change in responsibility regarding education from parents to schools and from the church to government was enormously successful. "In every German state, primary and secondary schools were built up, enlarged, equipped, ably staffed, tied together in sequence, and given fully articulated teaching programs and a clear sense of mission."21 Clearly Luther's vision for effective control of education and schooling was coming into fruition. Soon this control was firmly in place in Germany and was spreading outward: By the 1560's and 1570's, something like an integrated school system existed, or was coming into existence, in most of the Lutheran states in the Holy Roman Empire-integrated in the sense that its levels and streams were linked in a coherent structure, and that the educational apparatus as a whole was closely tied in its stated aims and assigned functions to the objectives and operations of the ecclesiastical and political organs of the state.22 In exploring the relationship between Luther's religious ideas and his contributions towards educational reform, it becomes obvious that this relationship was fully reciprocal. This relationship between Luther and Melanchthon and schooling was clearly mutually beneficial and interdependent. While they needed schools to provide people with the ability to understand true Christian doctrine based on the Bible, Luther and Melanchthon helped to create an effective educational system maintained and managed by the state. ...read more.