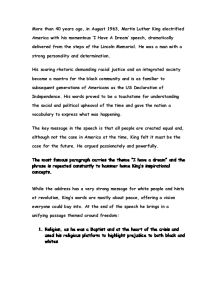 More than 40 years ago, in August 1963, Martin Luther King electrified America with his momentous 'I Have A Dream' speech, dramatically delivered from the steps of the Lincoln Memorial. He was a man with a strong personality and determination. His soaring rhetoric demanding racial justice and an integrated society became a mantra for the black community and is as familiar to subsequent generations of Americans as the US Declaration of Independence. His words proved to be a touchstone for understanding the social and political upheaval of the time and gave the nation a vocabulary to express what was happening. ...read more.

At the end of the speech he brings in a unifying passage themed around freedom: 1. Religion, as he was a Baptist and at the heart of the crisis and used his religious platform to highlight prejudice to both black and whites He was involved with campaigning such as the Montgomery bus boycott and had a peaceful protest about the injustice for poverty 2. He was a Baptist minister, and he was also the president of the southern Christian leader conference which demonstrated how he was actively involved with the church 3. He revolutionized black rights, unified all people, stopped racism, segregation and injustice and said that white and black are just colors and have no bearing on the soul, attitudes or beliefs of the people underneath the skin color 4. ...read more.

He captured the injustice of the time but also felt that this injustice was like a passing cloud. His speeches were largely free of revenge, instead focusing on the need to move forward. His passionate, but non violent protests, helped to raise awareness of racial inequalities in America, leading to significant political change. Martin Luther King was also an eloquent orator who captured the imagination and hearts of people, both black and white. 5. Racial segregation and injustice, progress, economic and political discrimination and human and civil rights. He was trying to raise awareness on human and civil rights. His goal was to communicate and engage to highlight to people and make them aware of what was happening. He was deeply into religion and his influences were jesus ...read more.