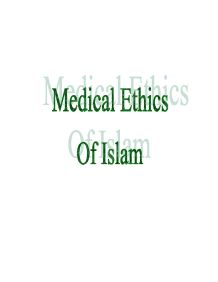 > Introduction - Medical Ethics - Islam > Abortion and Contraception - Life: A Gift from God - Abortion - Contraception - > Suicide and Euthanasia - The difference between suicide and euthanasia - Muslim views on suicide and euthanasia > Animal Research > Bibliography Medical Ethics Medical Ethics is about what is right and wrong in terms of the health issues that arise from many problems. The are two main topics these each have there own separate issues as well as a separate one. These are: > Life and Death issues: the main topics include euthanasia and suicide > Pregnancy: the main topics include abortion, fertility treatment and contraception. > Animal Rights: The main topic is whether animal research should be carried out. The religion that I shall be researching is Islam Islam Unlike other religions there are not many denominations inside Islam. There are only two main types thee Sunnis and Shia's. In the subject of medical ethics there are very few small variations in belief between the two. However there are also a few variations inside the sunni's. Mainly based on the four schools of thought: > Hanafi > Shafi > Hambal > Maliki In this project I am going to try and show you the views taken by Muslims on all of the main medical ethic issues including the variations. These include abortion, euthanasia, suicide, fertility treatments, contraception and animal research. ...read more.

These have been valid reasons for contraception although poverty is not a valid reason to use it. The difference between suicide and euthanasia Suicide refers to when someone deliberately ends their own life. Also called 'self - murder' it usually due to that they are depressed or suffering from other mental illnesses. Although this is recognised today in the pas it was treated as a crime and those who tried to commit it were severely punished. Religious views on this topic are almost the same for all of the main world religions. Euthanasia means 'good death.' It refers to when a person is helped to die quicker than they would have normally. The main difference between euthanasia and suicide is that euthanasia is done while being helped by another person as they may be too disabled or ill. There are a number of reasons for people wanting to commit euthanasia. The most common being that they are so sick that eventually they may not be able to do anything and thus think that they are losing all their dignity and independence. If someone asks for euthanasia then it is known as voluntary euthanasia. When not asked it is called involuntary euthanasia. This happens when someone else thinks that the quality of life is so bad that they would be better off if they were dead. When a person is helped to die it is called active euthanasia. ...read more.

On coming out of it, he saw a dog panting and eating mud because of excessive thirst. The man said, 'This (dog) is suffering from the same problem as that of mine.' So, he (went down the well), filled his shoe with water, caught hold of it with his teeth and climbed up and watered the dog. Allah thanked him for his (good) deed and forgave him.'' The people asked ``O Allah's Apostle! Is there a reward for us in serving (the) animals?'' He replied: ``Yes, there is a reward for serving any animate (living being).'' Narrated by Abu Huraira Allah created humans and animals. Humans were meant to be above animals although humans are to treat animals with respect as they are part of their livelihoods and are eaten to keep humans alive. Animals as well as humans have soul and in the herafter(judgement da day or Yaum -ul -Hisaab) there will be punishment on to those who were cruel to animals and a reward to those who helped or were kind to animals in any way. In the Qur'an it says "Seest thou not that it is Allah Whose praises are celebrated by all beings in the heavens and on earth, and by the birds with extended wings? Each one knows its prayer and psalm, And Allah is aware of what they do.'' Surah 22 Ayah18 www.google.com www. Ask-imam.com Discovery Philosophy & Ethics Bitesize Revision http://www.spuc.org.uk/muslims/prohibit.htm http://www.religiousconsultation.org/islam_contraception_abortion_in_SacredChoices.htm ...read more.