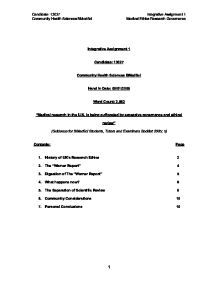 &quot;Medical research in the U.K. is being suffocated by excessive governance and ethical review&quot;.

Integrative Assignment 1 Candidate: 13027 Community Health Sciences BMedSci Hand in Date: 09/01/2006 Word Count: 2,982 "Medical research in the U.K. is being suffocated by excessive governance and ethical review" (Guidance for BMedSci Students, Tutors and Examiners Booklet 2005; 5) Contents: Page 1. History of UK's Research Ethics 2 2. The "Warner Report" 4 3. Digestion of The "Warner Report" 5 4. What happens now? 6 5. The Separation of Scientific Review 9 6. Community Considerations 10 7. Personal Conclusions 10 "Medical research in the U.K. is being suffocated by excessive governance and ethical review" This report will explore and focus on the recent overhaul and complete reform of the face of research ethics in the UK (United Kingdom).1 Researchers and research ethic committees have been waiting for these changes for a considerable amount of time but will they increase quality of research or the quantity of it. This report also will try to examine whether the new changed aid in the safety and dignity of participants or hinder these in favour of interesting research protocols. History of UK's Research Ethics The first signs of a "centralised" research governance system of ethics occurred in 1991. These were however set up as local branches known as LREC (Local Research Ethics Committees) and were involved in the regulation of research in their respective local NHS establishments.1,2 They are funded by local health authorities and made up by twelve members consisting of medical professionals to lay persons.3 There seemed to be no standardising of directives between each LREC and hence led to inconsistencies in approving research proposals, especially multicentre trials.4 This led to an uprising in researches complaining about the procedures in place which inevitably led to calls for a reform. The main concern was that for a multicentre approval the application was time consuming and was surrounding with "red tape" and bureaucracy which hindered the advance of research itself.5,6,7 This called for one regulatory body in the UK to have the final approval, if granted this meant that the approved research protocol could take place across a number of European countries without further criticisms. ...read more.

The new governance arrangements have aimed to target committee members which sometimes lacked guidance, funding, communication between committees and poor training.30 The independent ethics committee should be better guided and at the same time reduction of bureaucracy to hinder ethical research must be prevented, though not enough for flaws of ethical judgment to leak through to an extent of affecting research participant safety. It is finding the balance between these factors that is most important and the most difficult aspect of research ethics.31,32 The introduction of the European directive is a bid to stop the competition between ethical aspects and good clinical practice and instead seek to bind the two. The "good clinical practice" guidelines produced by the International Conference of Harmonisation were also based upon good ethical practice and the Declaration of Helsinki.33 The identification of the need to decrease legislation was also apparent in the article which was equally concerned with facilitating research and the ethics of projects concerned. The aim on the whole is to ensure that Europe remains an attractive location for interesting and financially motivated research. Sponsored and multicentre clinical trials will be of most benefited by the new directives.4 "It requires each member state to make one single opinion with regard to multicentre research, even if that research is limited to one member state."34 The governance of the research ethics committees will no doubt build on the above directives and it is hoped that it will produce better consistency. It is interesting to see however that this directive is an internal medical professional orientated bid and no lay or public input has gone into the formation of it. The public reluctance of scientific research is perhaps the stimulant of this nature of ethics committees that has decided to conduct private meetings.35,36 Also, no requirements or directives are in place about informing research subjects on decisions made in these meetings.24 "Paragraph 1.3 of the governance arrangements states that the dignity, rights, safety, and wellbeing of participants must be the primary consideration in a research study. ...read more.