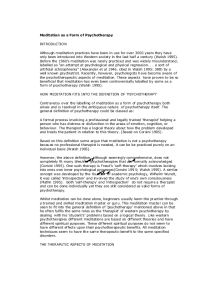 Meditation as a Form of Psychotherapy

Meditation as a Form of Psychotherapy INTRODUCTION Although meditation practices have been in use for over 3000 years they have only been introduced into Western society in the last half a century (Walsh 1995). Before the 1960's meditation was rarely practiced and was widely misunderstood, labelled as "an attempt at psychological and physical regression. . . a sort of artificial schizophrenia" (Alexander et al 1946, cited in Walsh 1995: 388) by a well known psychiatrist. Recently, however, psychologists have become aware of the psychotherapeutic aspects of meditation. These aspects have proven to be so beneficial that meditation has even been controversially labelled by some as a form of psychotherapy (Walsh 1995). HOW MEDITATION FITS INTO THE DEFINITION OF 'PSYCHOTHERAPY' Contraversy over the labelling of meditation as a form of psychotherapy both arises and is resolved in the ambiguous nature of psychotherapy itself. The general definition of psychotherapy could be classed as: A formal process involving a professional and legally trained 'therapist' helping a person who has distress or disfunction in the areas of emotion, cognition, or behaviour. The therapist has a logical theory about how the problem developed and treats the patient in relation to this theory. (Based on Corsini 1995). Based on this definition some argue that meditation is not a psychotherapy because no professional therapist is needed, it can be be practiced purely on an individual basis (Walsh 1995). ...read more.

It should be noted, however, that many of the positive effects that meditation has on psychological and psychophysical problems, such as high blood pressure and anxiety, can also be achieved through various relaxation techniques and sometimes through hypnosis (Berstein, Srull, Roy and Wickens 1991; Matlin 1995). Even still, these techniques usually involve aspects of meditation such as following the breath. However, relaxation techniques can be seen as a psychotherapy of their own, and, just because another form of psychotherapy can produce the same results as meditation can, this does not mean that meditation is any less valid a form of psychotherapy itself. There are almost as many psychotherapies as there are disorders (Zimbardo 1991) many of these therapies also produce the same results and have similar success rates as each other but are not considered any less valid. PARALLELS BETWEEN WESTERN AND EASTERN PSYCHOTHERAPIES Looking at the theory and techniques behind Western psychotherapies and Eastern meditation practices it is possible to find parallels between disciplines. The theories and concepts surrounding Buddhism and Buddhist meditation, for instance, can be likened to concepts of cognitive psychology (a psychological field which believes that mental process and behaviour can be explained through cognitive process' [Matlin 1995]). Like cognitive psychologists Buddhists see ignorance (avijja ), or false beliefs, as the source of all suffering (dukkha ) and believe the remedy for this suffering is understanding (pana ). ...read more.

An example of this is the 'day dream' in which we lose track of the conscious world for a brief moment and slip into fantasy (Walsh 1995). In relation to this, Asian psychotherapies see the average psychological state as a psychological disorder which involves aversion, addiction, and ignorance (Walsh 1995). They believe that full psychological health is only reached when these three phenomena are abolished (Kiyota 1978) and enlightenment is reached (Walsh 1995). CONCLUSION Meditation has been interpreted and misunderstood in Western society until the last half of this century. Psychologists and the general public are only now beginning to realise the benefits of meditation, not only for spiritual, but also for psychophysical and psychological health. Controversy over meditation's validity as a psychotherapy arises due to a lack of understanding about what a psychotherapy is as well as the fact that relaxation causes similar therapeutic effects. Although meditation does not completely fit the general definition of 'psychotherapy', other psychotherapies have also been seen not to . Relaxation can be considered merely another psychotherapy achieving the same means as meditation. Therefore, meditation is a form of psychotherapy. It even has close links with many aspects of Western approaches such as cognitive psychology. Meditation has some differences such as a spiritual techniques, a spiritual belief base of theory, and a different definition of psychologically health. These differences, however, do not make it any less a form of psychotherapy. The positive results meditation has upon certain psychological and psychophysical disorders are proof enough that meditation is a valid, consistent and effective means of psychotherapy. ...read more.