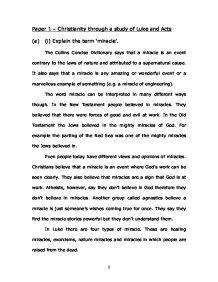 Paper 1 - Christianity through a study of Luke and Acts (a) (i) Explain the term 'miracle'. The Collins Concise Dictionary says that a miracle is an event contrary to the laws of nature and attributed to a supernatural cause. It also says that a miracle is any amazing or wonderful event or a marvellous example of something (e.g. a miracle of engineering). The word miracle can be interpreted in many different ways though. In the New Testament people believed in miracles. They believed that there were forces of good and evil at work. In the Old Testament the Jews believed in the mighty miracles of God. For example the parting of the Red Sea was one of the mighty miracles the Jews believed in. Even people today have different views and opinions of miracles. Christians believe that a miracle is an event where God's work can be seen clearly. They also believe that miracles are a sign that God is at work. Atheists, however, say they don't believe in God therefore they don't believe in miracles. Another group called agnostics believe a miracle is just someone's wishes coming true for once. They say they find the miracle stories powerful but they don't understand them. ...read more.

Jesus healed the girl by telling her to get up. When Jesus said this she woke up and everyone was overjoyed. In the story we also see that Jesus helped Jairus because he was a devoted father and that Jairus didn't want to take advantage of Jesus. We know this because in the story someone said "Your daughter is dead; don't bother the teacher any more." This shows that Jesus wanted the people to have faith and not give up. That is another why he helped the father, because Jesus wanted to strengthen the father's faith. The other story, in Luke, in which Jesus raises people from the dead is the widow's son at Nain (Luke 7:11-15). In this story a widow's only son has died so he is being carried out of the city in a coffin. In this story Jesus feels very sorry for the mother as she has no husband and no other son's to take care of her. She is alone and Jesus felt compassion for the woman. He then touched the coffin and told the son to rise. The son did this and the widow was very happy. In Luke there are several stories in which Jesus casts demons out from people. ...read more.

Jesus heals the man because he is repentant and because Jesus sees how much the man's friend want to help him. Some people may believe that this story teaches us to have compassion for people who are hurt or ill. Also it teaches us to forgive people but also to be repentant ourselves when we do something wrong. It teaches us that if we are repentant then God will forgive and heal us. Christians might read the miracles and get this response out of them. They may not believe that Jesus actually did these things but that the stories are told to teach us how to live our lives without giving us a set of rules. Some Christians believe that going to a church's healing service and praying can heal them or one that they are praying for. An example of a church where healing services take place is Addingham church, in west Yorkshire. On the first Sunday of every month they have a healing service where you can go. Hymns are sung and the bible and prayers are read. Then those who wish to be healed or wish for others to be healed come to the front of the church, say the name of the person who they want to be healed. Then the minister will place his hands on the head of the person and prayers are said. The prayers said are for the healing of the body, mind and the spirit. ...read more.