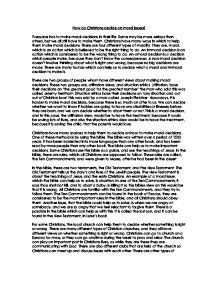 How do Christians decide on moral issues? Everyone has to make moral decisions in their life. Some may be more serious than others, but we all still have to make them. Christians have many ways in which to help them make moral decisions. There are four different types of morality. They are, moral, which is an action which is believed to be the right thing to do. An immoral decision is an action which is considered to be the wrong thing to do. An amoral decision is a decision which people make, because they don't know the consequences. A non-moral decision doesn't involve thinking about what is right and wrong, because no big decisions are made. There are many factors which can help us to decide what a moral and immoral decision to make is. There are two groups of people whom have different views about making moral decisions. These two groups are, utilitarian views, and situation ethics. Utilitarian, base their decisions on 'the greatest good for the greatest number' the man who said this was called Jeremy Bentham. Situation ethics base their decisions on 'any situation and act out of Christian love' this was said by a man called Joseph Fletcher. Nowadays, it is harder to make moral decisions, because there is so much on offer to us. ...read more.

A URC often has a form of a Sunday school. This is where children can go before the service, and then join in to he mass at the end. At the Sunday school, children can learn about the bible and talk about what it is teaching us. The United reformed church has different views on abortion and believes that it is not wrong. Another type of church is called Quaker. This church believes that war is wrong, and people should always use peaceful ways to resolve things. Quakers believe strongly in prayer, and most of the services are based on it. Sometimes at a Quaker church, they can have a whole sermon in silence, where they are listening to God. Christians believe that the power of prayer and the Holy Spirit can help them to make moral choices. Prayer is a very important part of Christians lives. Prayer is when Christians can communicate with God. Prayer can help us to make moral decisions, because when we pray, we can either be alone (private prayer) and think about things deeply, or we can pray as a group (communal prayer) and discuss things with each other. Although there is only one god, he can be described in three different ways, the father, the son, and the Holy Spirit. ...read more.

Many people go to court, or go abroad to a country where euthanasia is allowed. In conclusion, I believe that the most powerful way that helps us to make moral decisions is our conscience. I think this because it is always there, whereas with the bible, we do not necessarily always have it with us. Also with the bible, it was written thousands of years ago, and the issues we are faced with today; people were not faced with them when it was written. Also, if we have to make a decision quickly, we would not have time to go to the church. Also there are many different types of churches, so what one person thinks is wrong, another person would think is right. I think that our conscience is built up from the knowledge we have got from church and from the bible, so in a way it can work as all of them apart from prayer. We can pray whenever we want to, which can help us, but some Christians believe that their conscience is God answering their prayers. I think that our conscience is trained by how we are brought up, and therefore it is the best way to help us solve moral issues. ...read more.