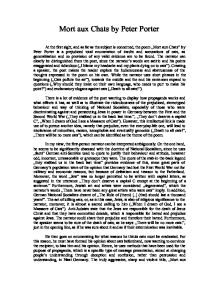 Mort aux Chats by Peter Porter At the first sight, and as far as the subject is concerned, the poem "Mort aux Chats" by Peter Porter is a prejudiced total enumeration of insults and accusations of cats, as generalization and no provision of any valid evidence are to be found. The narrator can clearly be distinguished from the poet, since the narrator's words are satiric and his points exaggerated and ridiculous ("I blame my headache and my plants dying on to cats"). Creating a speaker, the poet makes the reader explore the ludicrousness and abstruseness of the thoughts expressed in the poem on his own. While the narrator uses short phrases in the beginning ("Cats pollute the air"), towards the middle and the end his sentences expand to questions ("Why should they insist on their own language, who needs to purr to make his point?") and exclamatory slogans against cats ("Death to all cats!"). There is a lot of evidence of the poet wanting to display how propaganda works and what effects it has, as well as to illustrate the ridiculousness of the prejudiced, stereotyped behaviour and way of thinking of National Socialists, especially of those who were discriminating against and persecuting Jews in power in Germany between the First and the Second World War ("They stabbed us in the back last time.", "They don't deserve a capital C", "When I dream of God I see a Massacre of Cats"). ...read more.

Hence, he uses methods that have been used for the purpose of propaganda, which is a specific type of message presentation, aimed at changing people's understanding through deception and confusion, rather than persuasion and understanding, in Nazi Germany. The truly aggressive, sharp and violent title, "Mort aux Chats", considering its meaning, gains a sense of sophistication and scholarliness through its translation into French, it moreover is euphemistic, since it makes a brutal slogan, an incitement to kill sound less immoral and cruel. Also, it is surrounded by a revolutionary flair, a sense of a great change in, an improvement of conditions. The influence and impact on the reader is furthermore increased through the imperative. Another example that supports the impression of propaganda is the anapher of the word "cats" in four of five successive lines, that is like pointing one's finger at them, showing that they are guilty, insulting them not only with words but also with the help of repetition, that keeps the focus and the attention of the reader on them. In the whole poem, the word "cats" is repeated 13 times in fact. Using sharp, short sentences ("Cats spread infections", "Cats pollute the air"), the narrator increases the urgency of his speech. As he goes on, he uses questions ("Why should they insist on their own language and religion, who needs to purr to make his point?") ...read more.

As the poem goes on, the narrator uses longer sentences ("Perhaps they are all right in their own country but their traditions are alien to ours"), questions ("Why should they insist on their own language and religion, who needs to purr to make his point?") and exclamations ("Death to all cats!"), as he becomes more and more obsessed, passionate and vehement. His own harangue has made him that aggressive and violent that he wishes "Death to all cats!". Throughout the whole poem, the relationship between "cats", and "dogs" is used as an extended metaphor, combined with a personification in some parts ("Why should they insist on their own language and religion"). Although frequently "cats" seem to represent Jews, as in "They don't deserve a capital C", for instance, more generally speaking they correspond to a minority the majority has prejudice against and directs all anger and blame on. "Cats" therefore perform the role of scapegoats. The use of animals instead of human beings makes the ridiculousness of the narrator's ideas even more apparent. In the poem, the absence of a wide range of stylistic device underlines its prosaicity. To sum up, Porter's concern here is to convey that prejudice and intolerance is the source of racism and may eventually lead to genocide. Therefore, thoughts have to be examined and not everything believed straightaway without having any proof of it. Furthermore, the danger of prejudice is displayed in the poem , as well as society is criticized for its tendency to accept prejudice. ...read more.