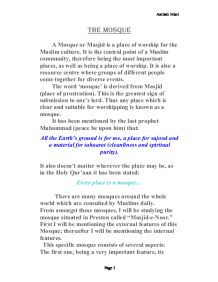 The Mosque A Mosque or Masjid is a place of worship for the Muslim culture. It is the central point of a Muslim community, therefore being the most important places, as well as being a place of worship. It is also a resource centre where groups of different people come together for diverse events. The word 'mosque' is derived from Masjid (place of prostration). This is the greatest sign of submission to one's lord. Thus any place which is clear and suitable for worshipping is known as a mosque. It has been mentioned by the last prophet Muhammad (peace be upon him) that: All the Earth's ground is for me, a place for sujood and a material for tahaarat (cleanliness and spiritual purity). It also doesn't matter wherever the place may be, as in the Holy Qur'aan it has been stated: Every place is a mosque... There are many mosques around the whole world which are consulted by Muslims daily. From amongst these mosques, I will be studying the mosque situated in Preston called "Masjid-e-Noor." First I will be mentioning the external features of this Mosque; thereafter I will be mentioning the internal features. This specific mosque consists of several aspects: The first one, being a very important feature, its dome. ...read more.

This enables the Men to stay over for ten nights which has been displayed in the picture above. It is therefore part of the comity leader's duty of the Mosques to make sure that the Imaams are knowledgeable, wise and devoted so they can keep sections, such as the area for the people in the month of Ramadhaan as mentioned earlier. It is important to select Imaams according to their knowledge of the Holy Qur'aan. The Imaams should have memorised the Holy Qur'aan and have knowledge of its interpretation. They should be able to recite it in a perfect way the way it has been revealed. They should also have knowledge of the Prophet's Sunnah (actions of the last prophet) his deeds and the history of Islam. They must be good instructors, modest and should have a good moral character. It is very important to have an Ideal Imaam because he is the positive reflection of the mosque as an instrument of guidance. He should set a good example for all others and must therefore be conversant, tolerant and must good-naturedly bear the responsibilities of his jobs. The holy Qur'aan reveals: "Invite call to the way of thy lord with wisdom and beautiful preaching." ...read more.

It may be that going to the mosque interferes with a person's job, in which they would find it hard to attend. Also in some parts of the world today, there are no Mosques. Also, in the early days of the Islamic religion there were no Mosques, yet followers of Muhammad were still called Muslims. Therefore Muslims can worship at there home and pray there too. They can also meet other Muslims and it doesn't have to be in Mosque. I believe that Muslims should attend the mosque, especially here in Britain where Islam is a major religion. I think Muslims should meet together to keep there faith strong, as it is good to spend time with the Muslim community. Muslims share experiences with each other, and celebrate festivals together. In modern times, there are a lot of things that can tempt Muslims away from their religion, and going to the mosque would keep their life on track with their religion. Going to the mosque enables the Qur'aan to be taught to them so they understand it, and so they will take away from the Mosques good values hence helping themselves and others. ?? ?? ?? ?? Aatikah Misri Page 1 ...read more.