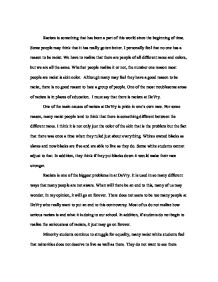 Most of us do not realize how serious racism is and what it is doing to our school. In addition, if students do not begin to realize the seriousness of racism,

Racism is something that has been a part of this world since the beginning of time. Some people may think that it has really gotten better. I personally feel that no one has a reason to be racist. We have to realize that there are people of all different races and colors, but we are all the same. Whether people realize it or not, the number one reason most people are racist is skin color. Although many may feel they have a good reason to be racist, there is no good reason to hate a group of people. One of the most troublesome areas of racism is in places of education. I must say that there is racism at DeVry. One of the main causes of racism at DeVry is pride in one's own race. For some reason, many racist people tend to think that there is something different between the different races. I think it is not only just the color of the skin that is the problem but the fact that there was once a time when they ruled just about everything. ...read more.

However, they tend to think they are because their skin is a certain color. To be as smart as they claim to be, they are not aware of the ignorance racism brings about. They do not understand the problems it brings forth in our school. If they were actually educated, they would find a way to get rid of the problem. Many racist people do not understand how ignorant they sound when they say the reason they hate blacks is their skin color. They call them niggers and try to degrade them to the best of their ability. As being an African American, I do not get offended. Many of them do not know what a nigger is. They use the word as if it was another way of saying black. If they knew the proper definition, they would realize from their foolish behavior that they are prime examples of the word. When many people think about racism, they simply think about someone not liking a group of people because of skin color or their cultural background. ...read more.

Some parents go as far as threatening to disown or kill their children if they see them with a person of black color. DeVry is a school that consists of people of many races, colors, and cultures. Hating a group of people is not going to make them disappear. It is surely not going to make life any easier for you or much harder for them. What we all need to do is realize that we are in this school together and learn to deal with it. Racism at DeVry is not something that will eventually go away. It has been a part of our world since one can remember. When will we realize it is not what is on the outside that matters it is what is inside. We need to stop treating people as if they do not deserve to be on this planet. We are all the same. We may have differences in our personality but as a race there is no difference. Racism has been a steady problem all through time. Finding a cure for this would be a major step towards ending racism in general. ...read more.