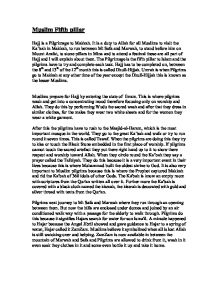 Hajj is a Pilgrimage to Makkah. It is a duty to Allah for all Muslims to visit the Ka’bah in Makkah, to run between Mt Safa and Marwah, to stand before him on Mount Arafat, to stone pillars in Mina and to attend a festival these are all part of Hajj and I will explain about them. The Pilgrimage is the fifth pillar to Islam and the pilgrims have to try and complete each task. Hajj has to be completed on, between the 8th and 13th of the 12th month this is called Dhull-Hijjah. Umrah is when Pilgrims go to Makkah at any other time of the year except the Dhull-Hijjah this is known as the lesser Muslims.

Muslims prepare for Hajj by entering the state of  Ihram. This is where pilgrims wash and get into a concentrating mood therefore focusing only on worship and Allah. They do this by performing Wudu the sacred wash and after that they dress in similar clothes, for the males they wear two white sheets and for the women they wear a white garment.

After this the pilgrims have to rush to the Masjid-al-Haram, which is the most important mosque in the world. They go to the great Ka’bah and walk or try to run round it seven times. This is called Tawaf. When the pilgrims are doing this they try to kiss or touch the Black Stone embedded in the first place of worship. If pilgrims cannot touch the sacred artefact they put there right hand up to it to show there respect and worship toward Allah. When they circle round the Ka’bah they say a prayer called the Talbiyah. They do this because it is a very important event in their lives because this is where Muhammad built the oldest shrine to God. It is also very important to Muslim pilgrims because this is where the Prophet captured Makkah and rid the Ka'bah of 360 idols of other Gods. The Ka'bah is know an empty room with scriptures from the Qur'an written all over it. Further more the Ka'bah is covered with a black cloth named the kiswah, the kiswah is decorated with gold and silver thread with texts from the Qur'an.

Pilgrims next journey to Mt Safa and Marwah where they run through an opening between them. But now the hills are enclosed under domes and joined by an air conditioned walk way with a passage for the elderly to walk through. Pilgrims do this because it signifies Hajars search for water for son Isma'il. A miracle happened to Hajar because the Angel Jibril showed and gave guidance to Hajar to a spring of water, Hajar called it ZamZam. Muslims believe it symbolized when all is lost Allah is still watching over and helping. ZamZam is now available in between the mountain of Marwah and Safa and Pilgrims are allowed to drink from it, wash in it even soak they clothes in it and some even bottle it up and take it home.

The third part of Hajj is where Pilgrims go to Mount Arafat-Mount of Mercy to Muslims. Because this is where Allah grouped Adam and Eve together. At the Mount of Mercy all pilgrims stand before God. At 12pm all pilgrims pray for everyone and anyone, they can also ask for forgiveness for sins and pray for sick,  this is called the wuquf. The wuquf is so important for the Hajj and Muslims because they believe their sins have been washed away and have been cleansed, Pilgrims feel they can start anew as well.

Next the pilgrims journey to Mina. In Mina there are four pillars and they represent Ibrahim and his family facing temptations and stoning the devil. The four pillars are used for pilgrims to chuck 3 stones at it implies that they are chasing the devil away just as Ibrahim did. Each stone represent each family member. They do this 4 times for each pillar.

To end the experience of Hajj pilgrims have a final festival called Eid-ul-Adha. All pilgrims must sacrifice an animal the festival lasts about 3 days. After this men shave their heads and women cut a little bit of their heads. When this has been accomplished   Ihram is completed. If pilgrims want to they can go back to Makkah and circle the Ka'bah, or go to ZamZam to drink, take, or dip their clothes in it. Then they can go home with a piece of the black cloth from the Ka'bah and with the name Hajji or Hajjah.