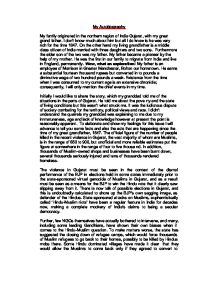 My Autobiography My family originated in the northern region of India Gujarat, with my great grand father. I don't know much about him but all I do know is he was very rich for the time 1847. On the other hand my living grandfather is a middle class citizen of India married with three daughters and two sons. Furthermore the elder son of the two was my father. My father became a pioneer by the help of my mother. He was the first in our family to migrate from India and live in England, permanently. Wow, what an exploration! My father is an employee of Morrison in Greater Manchester, Bolton our hometown. He earns a substantial fourteen thousand rupees but converted in to pounds a diminutive wage of two hundred pounds a week. Existence from the time when I was consumed to my current age is an extensive chronicle; consequently, I will only mention the chief events in my time. Initially I would like to share the story, which my granddad told me of the situations in the parts of Gujarat. ...read more.

genocide of Muslims in Gujarat, and as a result must be seen as a means for the BJP to win the Hindu vote that it clearly saw slipping away from it. There is now talk of possible elections in Gujarat, and this is undoubtedly calculated to shore up the BJP's own sagging image, as defender of the Hindus. State-sponsored attacks on Muslims, euphemistically called 'Hindu-Muslim riots' have been a regular feature in India for decades now, making a complete mockery of India's claims to being a secular democracy. Further, few NGOs themselves have actually bothered to intervene, and many, including some leading Gandhians, have shown their own biases when it comes to the Hindu-Muslim question. To make matters worse, the state has suggested the closing down of refugee camps, which would force thousands of Muslim refugees to go back to their homes, possibly to be killed by Hindus mobs there. Some Hindu dominated villages have made it clear that they would allow the Muslims to come back only if they agreed to convert to Hinduism. ...read more.

Tall as a ladder, immense boaster, as well as a pleasant sister. In the present day she experienced her first college hours anxiously. Her ambitions are to become a lawyer. She would be one of the best as seen as she's an immense boaster as mention once before. Finally me.... You know my name, you know my age, you know my bro, you know my sis, you know my boss, and so now you know my kin. If that's not rapped it up.... read on. I'm not an extremely fine rapper am I? Hence, I was born 5 and 1/2 pounds, named and brought into a 2 point 4 family, which later changed with the arrival of my brother. I went to St Paul's primary, another alteration in life came when moving onto Sharples secondary school. Once more I have come to a phase which complexes and is a chief significance to my future. And now studying GCSE subjects in year eleven I hope to achieve a high tier of grades. To conclude my autobiography I would like to say thank you to my readers plus I hope you got pleasure from reading it as I did writing it. (c) My Autobiography. All rights reserved. Author/Tosif Patel ...read more.