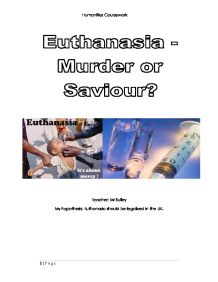 My hypothesis: Euthanasia should be legalized in the UK.I am going to answer a hypothesis to do with Euthanasia based on my collection of primary and secondary information.

Teacher: Mr Sulley My hypothesis: Euthanasia should be legalized in the UK. Throughout the investigation I am going to answer a hypothesis to do with Euthanasia based on my collection of primary and secondary information. A moral issue is a difference or conflict of opinion over a difference in beliefs, which usually involve a specific kind of experience1, i.e., an act which affect other people. These conflicts usually happen between religions, political parties, and countries, the holders of these beliefs are usually willing to act upon these beliefs. Moral issues are very controversial; the main reason for this is that there are many different opinions on them, and most of these opinions are very strong and the person who has the opinion would usually be willing to act on that opinion. At the moment Euthanasia is illegal in the UK; as it is in other European countries apart from the Netherlands. This is a map of the state at which countries are with Euthanasia: The hypothesis that I have chosen to investigate is: Euthanasia should be legalized in the UK. I have chosen this as my hypothesis because I believe it is an important statement and one that should be looked into in more detail. My key questions will help me to investigate my hypothesis and find out whether it is true or false. My key questions are: 1. What are the arguments for and against Euthanasia? 2. What are the case studies available on Euthanasia and what can be learned from them? 3. Do people's religious beliefs, gender or personal experiences affect how they feel about Euthanasia? 4. What is the media's opinion on Euthanasia and how does this affect people's view on the subject? 5. Are there certain circumstances when Euthanasia can be considered morally right, or is it always considered murder? Reasons for choosing my key questions: 1. This is my main key question; the importance of knowing the differences in opinion on Euthanasia will be important to this project. ...read more.

"Whether it is valuable or not, that is none of his business. If he once permits such considerations to influence his actions, the doctor will become the most dangerous man in the state." This quotation is used by Pro-Life supporters as a motto, believing that it is a physicians job to keep a person living as long as possible, not letting them die if there is something which can be done to prolong their life. Also, a lot of religions teach that your life is a gift and by rejecting it you are insulting god. This is why many religious people are against Euthanasia. * Euthanasia is way for the NHS to limit costs The NHS may choose to end a patient's life instead of extending it when it comes to the patient suffering great pain. They could persuade the patient to sign papers which approves their death when they are not fully aware that there may be ways to save them. The NHS may do this to save money. A senior at the Discovery Institute called Wesley J Smith said that: "drugs used in assisted suicide cost only about $40, but that it could take $40,000 to treat a patient properly so that they don't want the "choice" of assisted suicide." So surely it needs to be considered that the NHS may choose to end a person's life in order to avoid these costs. As you can see there are many strong opinions and good reasons for and against Euthanasia. However, I have found that more people in society agree with Euthanasia rather than disagree with it. Here is a graph from my questionnaires which stresses this point further. As you can see the question asked in my questionnaire was 'Do you agree with Euthanasia?' Out of the 40 questionnaires which I handed out (to people of varying age, gender and religion) 29 people agreed with Euthanasia, 10 people disagreed and 1 person had no opinion on the subject. ...read more.

There are a couple of factors that make my secondary data less reliable. One factor obviously is that I didn't collect they information myself so I can't be sure it came from a wide range of source and was consistently sticking to the desirable guidelines such as age, gender, and religion. Another factor was that some data I was finding from one source was contradicting itself so I decided not to use this data. One thing I could have done would have been to have spend more time on my primary research rather than on searching for reliable secondary research. Reliability, Validity & Bias I think my project was very reliable because I consistently worked hard to find only the reliable data by using only sources that I know would have precise and correct, up-to-date information on. I think my project was very valid as I worked very hard to find the whole range of the populations view, with all ages, genders, and religions on the whole topic and answered all the questions to their fullest extent. I don't think there are any elements of bias in your project because throughout my project I carefully selected only information free from bias that presented fact and I haven't integrated my own opinion other than where stated. The only way I think I could have improved my project more was to have taken a longer amount of time to research secondary data and to carry out more primary research tasks. Books Jenkins, J. Contemporary Moral Issues. Heinemann. 1997. Williams, B. One World Many Issues. Stanley Thorns. 1997. Internet www.euthanasia.com Information site. Neutral. www.news.bbc.co.uk/hi/english/static/health/euthansia/basics.stm Information site. Neutral. www.bbc.co.uk/religion/ethics/index.shtml information site. Neutral. www.carenotkilling.org.uk Pressure group. Against euthanasia. www.dignityindying.org.uk Pressure group. For euthanasia. Television Euthanasia - Life and death, BBC1. 1 http://philosophy.lander.edu/ethics/issue.html 2 http://www.bbc.co.uk/religion/religions/islam/islamethics/Euthanasia.shtml 3 http://www.bbc.co.uk/religion/religions/islam/islamethics/Euthanasia.shtml 4 http://www.bbc.co.uk/religion/religions/islam/islamethics/Euthanasia.shtml 5 http://www.bbc.co.uk/religion/religions/christianity/christianethics/Euthanasia_2.shtml 6 http://www.carenotkilling.org.uk/about/ 7 http://www.dignityindying.org.uk/information/factsheets.asp?id=84 ?? ?? ?? ?? Humanities Coursework 1 | Page ...read more.