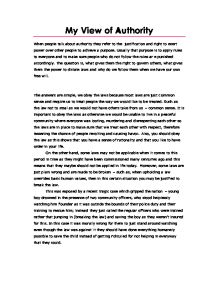 My View Of Authority

My View of Authority When people talk about authority they refer to the justification and right to exert power over other people to achieve a purpose. Usually that purpose is to apply rules to everyone and to make sure people who do not follow the rules are punished accordingly. The question is, what gives them the right to govern others, what gives them the power to dictate laws and why do we follow them when we have our own free will. The answers are simple, we obey the laws because most laws are just common sense and require us to treat people the way we would like to be treated. Such as the law not to steal as we would not have others take from us - common sense. It is important to obey the laws as otherwise we would be unable to live in a peaceful community where everyone was looting, murdering and disrespecting each other so the laws are in place to make sure that we treat each other with respect, therefore lessening the chance of people revolting and causing havoc. Also, you should obey the law as this shows that you have a sense of rationality and that you like to have order in your life. On the other hand, some laws may not be applicable when it comes to this period in time as they might have been commissioned many centuries ago and this means that they maybe should not be applied in life today. ...read more.

they seem to be in trouble then they should be given counselling and made to work out their problems to make sure that they do not repeat the offence again - basically they should be given help. In contrast, some people believe that offenders should be punished severely the first time to make sure that they do not re-offend. If they show no remorse for their actions or any liability or guilt then that means that there is something wrong and that they should be made to understand that their actions were wrong - they need to be punished severely if they do not own up to their guilt even though the evidence outweighs it. Capital punishment is when the offender is killed by hanging or electrocution etc. this is usually applied when the offender has taken someone's life, as a consequence of their actions their own life is taken away from them; capital punishment has sparked many debates all over the world especially from human rights activists who believe that people have no right to play God upon other people's lives. Whereas others feel that "an eye for an eye and a tooth for a tooth" applies here, and that those who feel justified to take another life should have their own brutally taken away from them as a consequence. ...read more.

Furthermore I believe strongly that we should be allowed to wear whatever makeup we desire and jewellery (within reason), as this is a freedom of choice and expression. It is unfair, I feel, that we aren't even allowed to wear crosses as a sign of religion and as a part of many peoples' religion yet the Muslims are allowed to wear headscarves as a sign of their religion. Moreover, one of my older friends had the view that TV licences should be scrapped as most people pay Sky for their television so they shouldn't have to pay the BBC too. The BBC should just advertise like all other channels. Lastly, he feels that it is wrong that a person who steals gets an eight year sentence whereas one who rapes only gets three...This is unjust. Therefore, I come to the conclusion that authority is not always right in the way that it governs people and that sometimes the rules can be wrong and unjust and it is up for the people of the state to prove this...after all, the rules are there for us and our protection and so if they are wrong and the majority thinks that they are wrong then they cannot be protecting us and therefore have to be changed. My overview of authority is that it is doing a great job considering the circumstances and the fact that it is so hard to be just when you have to impose rules upon other people. ...read more.