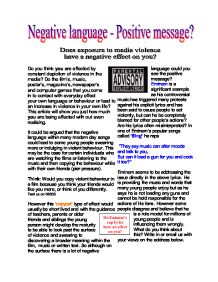 Negative language - Positive message? Does exposure to media violence have a negative effect on you?

Do you think you are effected by constant depiction of violence in the media? Do the film's, music, poster's, magazine's, newspaper's and computer games that you come in to contact with everyday effect your own language or behaviour or lead to an increase in violence in your own life? This article will show you just how much you are being affected with out even realising. It could be argued that the negative language within many modern day songs could lead to some young people swearing more or indulging in violent behaviour. This may be the case for certain individuals who are watching the films or listening to the music and then copying the behaviour while with their own friends (pier pressure). Think: Would you copy violent behaviour in a film because you think your friends would like you more, or think of you differently. Text us on 08005 However this 'copycat' type of effect would usually be short lived and with the guidance of teachers, parents or older friends and siblings the young person might develop the maturity to be able to look past the surface of violence and swearing to discovering a broader meaning within the film, music or written text. ...read more.

We also asked how many of you had a TV or computer in your room and again a high percentage came back as yes, 69%. This shows just how much violence many teenagers are routinely witnessing and interacting with in the privacy of their own bedrooms. This may seem normal to many of you but it was very different story for you parents, they probably only had one TV for the whole house- so they were much more restricted than you. That's why all the old films that are supposedly 'scary' aren't at all scary for us! This could also mean that many young people are being desensitised to real life violence. You are subjected to so much violence through your computer and T.V screens that should you see a fight or robbery in the street they might well consider it as a normal aspect of life. Do you think this ahs happened to you? This is especially troublesome when the violence that they engage in through computer games is of a cartoon type nature. If a character loses a life they just get another one or the game can be re-started. ...read more.

It is certainly an example of a film that as an effect upon the viewer. It may be harder to defend the content of violent video or computer games that do not seem to include any positive message. The most violent players get the most points and the victims within the games don't have families at home crying over their loss. Should this be accepted as a part of our everyday life, or should the law be changed to prevent games and films being too violent? Do you think these games are 'wrong' or do you think that the games are just a bit of fun and most people know the difference between the game and reality? If you have an opinion on the matter we would love to hear from you. Write in on: 66 Greendale Street Heaver ham London Or phone/text in on: O7989 257 162 As we have seen violence in the media can be argued to be both good and bad and if in fact it is having a negative effect on younger generations, is their any way to improve the situation? As we have seen there is no simple way to completely stop violence in the media or in reality. ...read more.