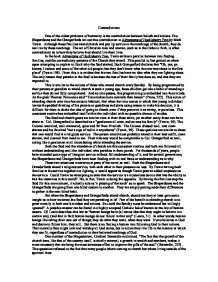 One of the oldest problems of humanity is the contradiction between beliefs and actions. The Shepardsons and the Grangerfords act out this contradiction in Adventures of Huckleberry Finn by Mark Twain.

Contradictions One of the oldest problems of humanity is the contradiction between beliefs and actions. The Shepardsons and the Grangerfords act out this contradiction in Adventures of Huckleberry Finn by Mark Twain. Although these families attend church and pay lip service to the teachings of the church, they do not live by these teachings. The act of Christian men and woman, such as in the Catholic faith, is often contradictory as to how they believe they should live their lives. In the book Adventures of Huckleberry Finn, Twain strikes a parallel between two feuding families, and the contradictory patterns of the Church they attend. This parallel is first grazed on when upon attempting to explain to Huck why the feud started, Buck Grangerford declares that "Oh, yes, pa knows, I reckon and some of the other old people; but they don't know what the row was about in the first place" (Twain 108). From this it is evident that the two families have no idea what they are fighting about. The only reason they partake in the feud is because the rest of their family has done so, and that they are expected to. ...read more.

This quotation refereed to the fact that many people where coming to church but where living outside of the spiritual laws. One might be tempted to ask, whose fault was it that so many have been mislead? As far as liturgically speaking Mathew Conbeg believes that, "A silent factor responsible for the cultic behavior is the system of education for the clergy" (Conbeg, 64). Conbeg's statement reflected upon the miss teaching of the clergy, and how it had led to a lapse in the understanding of the scripture. This misunderstanding is then passed down to the people attending worship, who take this word as absolute truth, as they put all their trust in the clergy. In the case of the Shepardsons and Grangerfords, the Clergy is equivalent to the elders of each family. They are the one's who have been mistaught in the feud, having a complete misunderstanding of the feud and how it began. A passing down of information can also attribute to a misunderstanding in the core beliefs of the two examples. Phillip Gleason, stated "as the ethnic group blurred into third and fourth generations the patterns of worship at Sunday mass and in religious devotionals remained static" (Gleason, 208). ...read more.

Huck seems to make a decision between heaven and hell by choosing which place Tom will go to. Huck also gets the concept of prayer mixed, up when he states, "And I about made up my mind to pray, and see if I couldn't try to quit being the kind of a boy I was and be better"(Twain, 285). Huck seems to have the idea that praying makes a good person, and the lack of prayer makes someone a bad person. Lastly, Huck believes that one right deed will take him to heaven. This idea is expressed when he says, "But I didn't do it straight off, but laid the paper down and set there thinking -- thinking how good it was all this happened so, and how near I come to being lost and going to hell" (Twain, 285). Huck belief of turning Jim in, he will get into heaven completely misses the mark on any Catholic teaching on the road to heaven. There are no simplistic solutions to the contradictions in human nature. It has no doubt been helpful to make the mass more understandable and real. However, as long as the human condition prevails, humans cannot be forced into any single understanding of God and God's laws. ...read more.