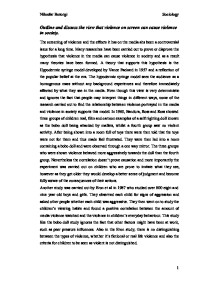 Outline and discuss the view that violence on screen can cause violence in society.

Outline and discuss the view that violence on screen can cause violence in society. The screening of violence and the effects it has on the media ahs been a controversial issue for a long time. Many researches have been carried out to prove or disprove the hypothesis that violence in the media can cause violence in society and as a result many theories have been formed. A theory that supports this hypothesis is the Hypodermic syringe model developed by Vance Packard in 1957 and a reflection of the popular belief at the era. The hypodermic syringe model sees the audience as a homogenous mass without any background experiences and therefore immediately affected by what they see in the media. Even though this view is very deterministic and ignores the fact that people may interpret things in different ways, some of the research carried out to find the relationship between violence portrayed in the media and violence in society supports this model. In 1963, Bandura, Ross and Ross showed three groups of children real, film and cartoon examples of a self righting doll known as the bobo doll being attacked by mallets, whilst a fourth group saw no violent activity. ...read more.

This study like the bobo doll study ignores the fact that other factors might have been at work, such as peer pressure influences. Also in the Eron study, there is no distinguishing between the types of violence, whether it's fictional or real life violence and also the criteria for children to be seen as violent is not distinguished. However there have been real life incidents that would support the hypodermic syringe theory, such as the shootings in the Columbine High school. A theory that disagrees with the Hypodermic syringe model is the Cultural effects model. This theory doesn't believe in the media having an immediate affect on the audience and recognizes the fact that the media audience is very diverse. Rather this theory argues that audiences are exposed to the media so much that the come to accept the preferred reading of programmes in the media. This theory suggests that audiences are exposed to violence in the media so much that they eventually come to accept violence and aggression as a norm in everyday life and culture. ...read more.

Blumer and McQuail (1968) argue that people watch what they want from the media, they have a choice as to what programmes to watch and that they are a heterogeneous and active group who have different interpretation and uses for the media. For example, Freshbach and Singer in 1971 studied bys aged nine to fifteen in homes for unprivileged children and boarding schools, the staff were told to allow one group to watch programmes with scenes of violence and another group had to watch non violent programmes. Later it was found that boys who had watched violence became less aggressive than before. The experimenters felt that one reason for this might have been that those who had watched violence felt privileged and those who were not allowed to resented it. As always such experiments are conducted under what might not be lab conditions but still not a real life situation. Also the research was carried out only on boys and therefore unrepresentative of the population as a whole. The research carried out and their findings are contradictory to such a degree that it remains largely inconclusive whether violence in the media has a direct effect in society. ?? ?? ?? ?? Niloofar Bozorgi Sociology 1 ...read more.