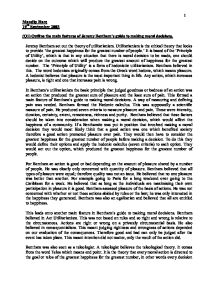 Mandip Hare 19th September 2003 (Q1) Outline the main features of Jeremy Bentham's guide to making moral decisions. Jeremy Bentham set out the theory of utilitarianism. Utilitarianism is the ethical theory that looks to provide 'the greatest happiness for the greatest number of people.' It is based of the 'Principle of Utility', which is that in any situation that there is moral decision to be made, one should decide on the outcome which will produce the greatest amount of happiness for the greatest number. The 'Principle of Utility' is a form of hedonistic utilitarianism. Bentham believed in this. The word hedonism originally comes from the Greek word hedone, which means pleasure. A hedonist believes that pleasure is the most important thing in life. Any action, which increases pleasure, is right and one that increases pain is wrong. In Bentham's utilitarianism the basic principle that judged goodness or badness of an action was an action that produced the greatest sum of pleasure and the least sum of pain. This formed a main feature of Bentham's guide to making moral decisions. A way of measuring and defining pain was needed. Bentham formed the Hedonic calculus. This was supposedly a scientific measure of pain. He produced seven criteria to measure pleasure and pain. These were intensity, duration, certainty, extent, remoteness, richness and purity. Bentham believed that these factors should be taken into consideration when making a moral decision, which would affect the happiness of a community. ...read more.

The only problem is that the hospital is extremely short staffed and only has one doctor available. Who should the doctor attend to? A Benthamite would have to apply the hedonic calculus. Attending to the mother would result in the greatest happiness, as three lives would be saved. There is also a greater richness and purity of saving a young ones life who has a likelihood of a long and happy life ahead. There is more pleasure generated as three peoples lives have been saved. There is a clear likelihood that the duration and extent of pleasure experienced by the mother and children will be greater than the pleasure of saving one elderly life. This is because duration of the elderly life is uncertain and also the women has lived the majority her life ('the good innings argument'). The utilitarian doctor has decided to help the mother because there will be greater years of pleasure experienced by her and her children. But the question is, is it possible to measure pleasure in the number of years, and who will do the measuring? Another problem is that the hedonic calculus is relying on the doctors' predictions. The mother and her twins may not be happy. The twins may be involved in a serious car crash, which results in them being severely disabled and reliant on hospital care. This will result in pain for the twin's family and friends in the long term. ...read more.

However some believers feel that Bentham's ideas were perfectly adequate. He believed in Egalitarianism- all are entitled to happiness. This is a key aspect of utilitarianism. Another key aspect of utilitarianism is the teleological theory. This is a central part of utilitarianism and there would be no improvements needed. Religious believers would favour utilitarianism because Jesus' teachings by claiming that to love your neighbour as yourself constitutes 'the ideal perfection of utilitarian morality.' To conclude it is inevitable that religious believers and utilitarianism would consider Bentham's ideas inadequate because he had lost the idea that certain pleasures did not always stay pleasurable. Utilitarianism depends our ability to know what gives other people happiness. This is changing constantly. Others may find the whole idea of utilitarianism inadequate to some extent. Greatest happiness for the greatest number is the core for utilitarianism thought, but as philosopher W.D Ross pointed out we cannot rely on just one equation for every situation, 'life's ethical dilemmas cannot be reduced to a pre packaged, predictive calculus which balances outcomes.' For example, if you were a doctor and had to save one person out of your daughter or another doctor who had the cure to AIDS, who would you save? According to the greatest happiness for the greatest number you would save the doctor. Personally however you would want to save your daughter, after all she is your own flesh and blood. Ross believes in the prima-facie duty, which are the most important duties and the ones that should be carried out. 1 ...read more.