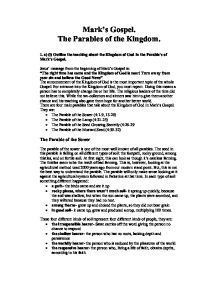 Outline the teaching about the Kingdom of God in the Parable's of Mark's Gospel.

(ii) Explain, with examples from Mark's Gospel, the differences between a parable and an allegory. A parable is a story from real life with one particular meaning or message. An allegory is a story where the message is coded and everything in the story stands for something else. Though all the stories Jesus told are called parables, many of them were told in allegory form. Because it is difficult to understand allegories, more than parables, Jesus always had to explain to the people he was telling the parable or allegory at the end, once he had finished, what it meant. For example, form the 4 'parables' used above they all have an allegorical meaning. Every object used in each parable; in each own ways, represents something else, a hidden meaning. Most of the stories used in Mark's Gospel are parables, but as we are talking about the Kingdom of God, relating to faith, these are the most obvious to be allegories, as they could represent Christ, God, or the faith growing inside you, which is represented as a seed. One of the most known allegories in Mark's Gospel is 'The Parable of the Tenants'. All the men who are involved in the story each represent something else. Though all stories in the gospel are called parables, you could change many of them into allegories as everything can have a different meaning if you want it to. (iii) Explain the use of parables in Mark's Gospel Between the parable of the sower and its allegorical meaning, Mark has a few verses in which Jesus explains why he teaches in parables. ...read more.

So, we'll never know what Mark meant to say to us. Some people choose to believe something while others believe the complete contrary but you cannot say which one of them is right on who is wrong. I think this Earth, in some ways could be seen as God's Kingdom. There are some amazing people out there helping the most they can to anyone in the world. You have to appreciate these people and be glad they do exist. Charities are an example that God is here with us. They raise money for those people who need it instead of keeping for themselves, and everyone who contributes towards it is also an example. Mother Teresa was an example of someone who tried to make this earth the best possible by helping everybody she could. On the other hand, there are also terrible people who murder and steal from others. These people are not the majority but it is still true that they do exist. Things like third world hunger; disasters happening everywhere in the world really make me wonder if this really is God's Kingdom. Sometimes I wish that it isn't so that what comes after will be better than this, and give me some hope. Other times, I wish I never left this earth and all the wonderful people who populate it. But they are just opinions. Everything in this world must be balanced, and so all the good things happening are balanced by all the bad things, in a way. As nobody is perfect, this earth also isn't. By Maria Guisasola 10.1 ...read more.