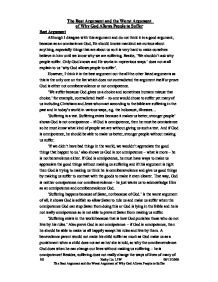 Personal Views on Evil and suffering

The Best Argument and the Worst Argument of Why God Allows People to Suffer Best Argument Although I disagree with this argument and do not think it is a good argument, because as an omniscience God, He should knows mankind are curious about anything, especially things that are about us so it is very hard to make ourselves believe in him until we know why we are suffering. Beside, 'We shouldn't ask why people suffer. Only God knows and He works in mysterious ways.' does not at all explain to us 'why God allows people to suffer'. However, I think it is the best argument out the all the other listed arguments as this is the only one on the list which does not contradicted the argument itself or prove God is either not omnibenevolence or not omnipotence. 'We suffer because God gives us a choice and sometimes humans misuse that choice.' for example, contradicted itself - no-one would chose to suffer yet many of us including Christians and Jews whom act according to the bible are suffering in the past and in today's world in various ways, e.g. the holocaust, illnesses... 'Suffering is a test. Suffering exists because it makes us better, stronger people' shows God is not omnipotence - if God is omnipotence, then he must be omniscience so he must know what kind of people we are without giving us such a test. ...read more.

'Suffering exists because humans have taken what God has given them and used for their own good and not for the good of humankind.' shows he is not omnipotence and omnibenevolence for the same reason as above - he should be able to make all human care for each other if he is really omnipotence and if he is at all loving, he would not want to see, never mind to make one human suffer as the consequence of the other human being selfish which is what is happening now in the world. On the other hand, even though the argument, 'We shouldn't ask why people suffer. Only God knows and He works in mysterious ways' does not explain 'why God allows people to suffer', it does not contradicted itself or prove God is not omnipotence or omnibenevolence. Therefore, I think it is the best argument of all listed though I do not think it is a good argument nor do I agree with it. Worst Argument For more than once, the Bible states or hint that the world is ruled by devil for a while. During the 40 days and night in the wildness, the devil once tried to tempted Jesus by '...taketh him up into an exceeding high mountain, and sheweth him all the kingdoms of the world...' ...read more.