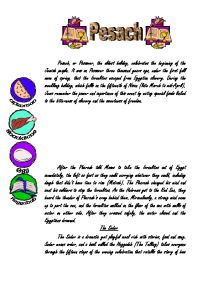 Pesach, or Passover, the oldest holiday, celebrates the beginning of the Jewish people.

Pesach, or Passover, the oldest holiday, celebrates the beginning of the Jewish people. It was on Passover three thousand years ago, under the first full moon of spring, that the Israelites escaped from Egyptian slavery. During the weeklong holiday, which falls on the fifteenth of Nisan (late March to mid-April), Jews remember the power and importance of this event by eating special foods linked to the bitterness of slavery and the sweetness of freedom. After the Pharaoh told Moses to take the Israelites out of Egypt immediately, the left as fast as they could carrying whatever they could, including dough that didn't have time to rise (Matzah). The Pharaoh changed his mind and sent his soldiers to stop the Israelites. As the Hebrews got to the Red Sea, they heard the thunder of Pharaoh's army behind them. Miraculously, a strong wind came up to part the sea, and the Israelites walked on the floor of the sea with walls of water on either side. After they crossed safely, the water closed and the Egyptians drowned. ...read more.

It also represents the sea the Israelites crossed and therefore freedom. 5. KARPAS - Fresh greens that are usually parsley, celery or lettuce. Karpas is a symbol of new life in nature and new life for the Jewish people when they were freed from bondage. It is usually dipped in SALT WATER, which represents the tears of the slaves. It also represents the sea the Israelites crossed and therefore freedom. Matzah Jews eat flat, bumpy bread, during the week of Passover (they don't eat food with chametz in) to remember that their ancestors didn't have time to let their dough rise before they fled from Egypt. Matzah was the plain, humble food of slaves, but it also recalls the great moment of freedom. Leavened bread is puffed up and fancier than matzah; it symbolizes self-importance. Matzah teaches about the simplicity and humility of the poor, as Passover is a time to examine oneself for signs of being too proud. The Four Questions A child, not the leader, starts the story of the Exodus. ...read more.

There's no seder like our seder, There's no seder I know. Everything about it is Halachic nothing that the Torah won't allow. Listen how we read the whole Haggadah It's all in Hebrew 'Cause we know how. There's no Seder like our Seder, We tell a tale that is swell: Moses took the people out into the heat They baked the matzah While on their feet Now isn't that a story That just can't be beat? Let's go on with the show! Haggadah Wash that Man Right out of my Hair Haggadah wash that man right out of my hair Because he's full of chametz but he doesn't care. That it's a custom now to be rid of that snare, I'll send him on his way. Haggadah drink my wine and feel real free, Haggadah eat choruses, matzah and tea, Haggadah keep the Seder, with joy and glee. I really love that day!! He doesn't like gefilte fish, eat it up, eat it up. He doesn't like the matzah dish Heat it up, heat it up. can't wait for him to change- Hey buddy... (Repeat 1st verse). ...read more.