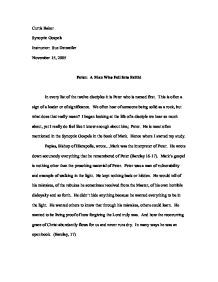 Peter: A Man Who Fell Into Faith!

Curtis Baker Synoptic Gospels Instructor: Sue Detweiler November 15, 2005 Peter: A Man Who Fell Into Faith! In every list of the twelve disciples it is Peter who is named first. This is often a sign of a leader or of significance. We often hear of someone being solid as a rock, but what does that really mean? I began looking at the life of a disciple we hear so much about, yet I really do feel like I know enough about him; Peter. He is most often mentioned in the Synoptic Gospels in the book of Mark. Hence where I started my study. Papias, Bishop of Hierapolis, wrote...Mark was the interpreter of Peter. He wrote down accurately everything that he remembered of Peter (Barclay 16-17). Mark's gospel is nothing other than the preaching material of Peter. Peter was a man of vulnerability and example of walking in the light. He kept nothing back or hidden. He would tell of his mistakes, of the rebukes he sometimes received from the Master, of his own horrible disloyalty and so forth. He didn't hide anything because he wanted everything to be in the light. He wanted others to know that through his mistakes, others could learn. He wanted to be living proof of how forgiving the Lord truly was. And how the reoccurring grace of Christ abundantly flows for us and never runs dry. ...read more.

Just as God reveals his name as we are faithful to him, so he reveals Peter's name to him. A solid demonstration of God's love and giving is demonstrated as he gives an awesome gift of a new name to a faithful servant. Peter's faith is not to be out done by his love and loyalty to Jesus. He was a passionate man with whatever he put his hand to doing. All of Peter's life, the desire for completeness, wholesome and a valued life were on the inward most parts of his heart. Now that he had found a savior and friend, it was hard for Peter to accept the fact that Jesus would actually suffer and even be put to death. It built up an angry rage within Peter. Jesus quickly rebukes Peter in Matt 16:23, by stating "Get thee behind me Satan." Jesus was aware of the schemes of the enemy to attack Peter. This was not Peter's darkest time though. It would later come that Peter would face what some call "the great denial" (Jerome). Peter was questioned at the high priest's home about his association with Jesus. Peter, fearful for his life, denied Jesus...his master (Mark 14:66-72). However, Barclay points out that many are quick to condemn and look down on Peter. Yet, it must be taken into account where the other disciples were at that time. "Peter was in the courtyard of the high priest's house when the other disciple had melted terror-stricken into shadows and fled (Mark 14:50). ...read more.

Peter proves what I have often heard Joyce Meyer say over and over: "if you fall down, pick your self up, dust yourself off and keep on walking. Otherwise you are going to live in a mud puddle." That is Peter! As many times as he messed up, he repented and learned with great revelation how forgiving the Father is to us all. Studying Peter has been truly awesome. It brings to me the verse in Luke 9:62 where it says, "No on, having put his hand to the plow, and looking back, is fit for the kingdom of God." Peter keeps trucking on. He pushed through what could have been a true fatal moment of denial and ended up becoming of the greatest men in the Bible. Thanks Peter for not being afraid to mess up and show us the way! WORKS SITED Barclay, William. The Master's Men. Nashville-New York: Abingdon Press. 1959. Butler, Alban. Lives of the Fathers, Martyrs and other Principal Saints. London: Virtue and Company Ltd., 1949. Eusebius. The Church History. New York: William Heinemann Ltd., 1929. Eusebius. The Ecclesiastical History, tr. Chester D. Hartranft. A Select Library of Nicene and Post-Nicene Fathers of the Christian Church. Vol. II, 1952 Geisler, Norman & Howe, Thomas. When Critics Ask: A popular Handbook on Bible Difficulties. Wheaton, IL, Victor Books. 1992 Jerome, The Lives of Illustrious Men. Grand Rapids, MI. William B Eerdmans Publishing Company, 1952. Peterson, Eugene. The Message. Spirit-Filled Life Student Bible. New King James Version. Nashville, TN. Thomas Nelson Publishers 1995. ?? ?? ?? ?? Baker 7 ...read more.