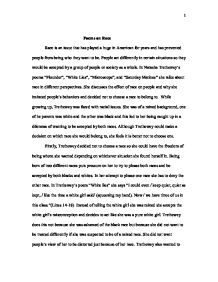 Poems on Race Race is an issue that has played a huge in American for years and has prevented people from being who they want to be. People act differently in certain situations so they would be accepted by a group of people or society as a whole. In Natasha Trethewey's poems "Flounder", "White Lies", "Microscope", and "Saturday Matinee" she talks about race in different perspectives. She discusses the effect of race on people and why she imitated people's behaviors and decided not to choose a race to belong to. While growing up, Trethewey was faced with racial issues. She was of a mixed background, one of he parents was white and the other was black and this led to her being caught up in a dilemma of wanting to be accepted by both races. Although Trethewey could make a decision on which race she would belong to, she feels it is better not to choose one. ...read more.

She enjoyed being mixed and having the ability to pretend to be someone whom she wasn't. She wanted to have the freedom to switch between which race she chose depending on the situation she found herself in. Secondly, Trethewey decides not to choose a race because by choosing one race over the other because she might offend her family members. She felt free associating with people from both races and she felt pressure and harassment from the other race when she tried to pick one race over the other. In Trethewey's poem White Lies Trethewey says, "But I paid for it every time / Mama found out. / She laid her hands on me, / then washed my mouth with Ivory Soap."(Lines 19-23 ) Trethewey implies that when she once tried to choose the white race over the black her mum beat her and washed her mouth with soap. ...read more.

This makes her feel less challenged to choose one race over the other when people of all races are very similar but different in only skin color. In conclusion, Trethewey was a girl caught up in a dilemma of pleasing two different races while avoiding being discriminated against. After learning of the similarities of the black and white races of people who feel like they were very different, she feels less pressure by not picking one side over the other. She was also warned by both her white aunt and black mum to be like them. Trethewey did not know how to please both races. Although she could make a decision on which race to choose, she decides not to choose one race over the other. She wanted to have the freedom to have a personal experience with both races, she wanted to be able to pick either race whenever the occasion arose, and she did not want to be discriminated against by the black race if she chooses the white race over them and vice versa. 1 ...read more.