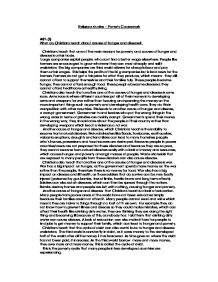 Poverty. What do Christians teach about causes of hunger and disease?

Religious studies - Poverty Coursework A01. (i) What do Christians teach about causes of hunger and disease? Christians teach that one of the main reasons for poverty and causes of hunger and disease is unfair trade. Large companies exploit people who cant find a better wage elsewhere. People like farmers are encouraged to grow whatever they can most cheaply and sell it worldwide. The big companies use third world citizens for cheap labour and pay them unfair wages. This helps the profits of the big companies but is bad news for the farmers. Farmers do not get a fair price for what they produce, which means they still cannot afford to support themselves and their families fully. These people become hungry, they cannot afford enough food. These people become diseased, they cannot afford healthcare or healthy living. Christians also teach that another one of the causes of hunger and disease is arms race. Arms race is where different countries put all of their money into developing arms and weapons for war rather than focusing and spending the money on the more important things such as poverty and developing health care. They do this in competition with other countries. This leads to another cause of hunger and disease, a corrupt government. Governments and leaders who put the wrong things in the wrong order in terms of priorities are mainly corrupt. Governments spend their money in the wrong way, they should care about the people of their country rather than developing weapons which lead to violence and war. ...read more.

There is also another message in this extract which says that if we lend money to the third world countries, we should take into account just how poor they are and how much they need the money to feed themselves and keep themselves healthy, and not charge them interest as this will just contribute to the cycle of debt, the needy will end up having an increasing debt to handle. Leviticus25:35,37 "if one of your countrymen becomes poor and is unable to support himself among you, help him as you would help an alien or a temporary resident so that he can continue to live among you, you must not lend him money at interest or sell him food at a profit." Christians may use this bible reference in a discussion about hunger and poverty because it teaches us a similar message to the previous extract i wrote about, which is that we should support the poor people of the world so they can continue living to be a part of our world. Also, again, to not charge the needy interest or make a profit from them which is what is going on in the world today (exploitation), because they are much more in need to stay healthy and prevent their hunger than we are, as we have a lot more money to aid us. AO2. Using CAFOD, explain how Catholics may respond to world hunger and disease. Catholics may respond to world hunger and disease using CAFOD in a very positive way. ...read more.

I can see why some people may not agree with this quote, they might say that Christians are not responsible for each other but for themselves, they might argue that not a lot of people would accept responsibility for them so why should they accept responsibility for anybody else? They may also think about what would happen if the positions were switched, the now wealthy people would take responsibility for those now in need. They may think that they are reluctant to take responsibility for those in poorer countries because they feel that they should learn to be less dependant on us and learn to look after themselves a little bit more. The people who disagree may also think that the problems are so far away from them that the responsibility they take on and the help they give wouldn't be appreciated anyway, and the problems are too far away so therefore they shouldn't get involved in them. Sometimes because people of our wealthy world are so far away from those suffering, they do not have any idea what it is like so therefore do not really care about it. Another point of view from a person who disagrees with the statement could be that it is not their fault that the world is how it is and it should be up to the people who's fault it is to do something about it and help stop the worldwide problems, not them. The final point of view that i am going to mention is that some people feel that they cannot take responsibility for fellow Christians as they do not feel it will make any difference, the help needed is out of their hands. ...read more.