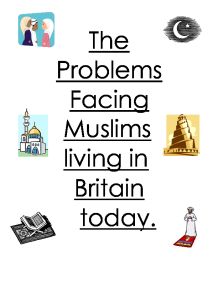 The Problems Facing Muslims living in Britain today. Problems facing Muslims living in Britain today. Food and Drink Muslims can only eat food and drink that is halal. Its limits the food they can eat. The food they cannot eat or drink is called haram. The food and drink rules are very strict. They cannot drink alcohol because in the Qur'an it states that alcohol can cause forgetfulness of Allah and salat. In addition, Muslims believe it can lead to unsocial problems, bad health and drunkenness. They cannot eat any meat that comes from an animal that eats other animals. What's more, they are not allowed to eat any meat that comes from a pig because it is thought dirty and unclean. Meat has to be blessed before being eaten. Muslims find it hard to buy or go out to eat because there are very few halal eating-places. In addition to their problems, halal food is a lot more expensive and hard to find. It does not matter if they accidentally eat haram food but it is a sin to do it on purpose. But a Muslim may eat haram food if they are in a life threatening situation. Every Muslim should follow the eating rules, as it is custom to being a Muslim. ...read more.

Between 1940 and 1960, many Muslims moved to Britain from places such as East Africa and South Asia. This period has been described as a "golden era" of Muslim migration. Other Muslims came to Britain because they could get jobs and send their money back to their family. When their pounds were exchanged to local currency, it would work out as much more money. Some immigrants planned only to stay for a while, but ended up staying permanently. Problems facing Muslims living in Britain today. Muslim views on other religions The Qur'an describes Christians and Jews as members of the family of Abraham (one of the prophets) and Muslims respect these religions because they believe that they all worship the same God. Muslims do not believe that Jesus was the Son of God, but that he was one of God's prophets, just like Muhammad. Muslims believe in many of the stories about Jesus that the Christians believe in. For example, they believe in the virgin birth and that Jesus will come again. In fact, Jesus is regarded within Islam as a special prophet. His name is in the Qur'an 25 times - more times than Muhammad's. This makes it easier for Muslims to live in peace with other religions in Britain and makes harmony between them. ...read more.

In some relatively worldly or multi-religious Islamic countries, this is not the case such as in Algeria, Malaysia, Indonesia and Turkey. Even though , homoerotic themes were in poetry and other literature by some Muslims which celebrated male love, and were more common than expressions of attraction to women. Some movements in Islam, such as the Al-Fatiha Foundation, accept and consider homosexuality as natural, either regarding Qur'anic verses as out of date in modern society, or pointing out that the Qu'ran speaks out against homosexual desire, and is silent on homosexual love. Writer Irshad Manji, a lesbian herself and a staunch critic of Islam, is of the opinion that homosexuality is permissible within Islam; however, it only remains a small viewpoint. People have argued that the legality of sex-change operations. Whereas some rule that the Islam disallows homosexuality and ordains a capital punishment for a person guilty of it. Problems facing Muslims living in Britain today. School and children Teenagers living in Britain will have an incredible amount of difficulty especially in their school lives. Muslim parents believe that their children should be educated in single sex schools as soon as the children reach puberty (single sex secondary schools). Some Muslim parents also believe that girls should not have an academic education. In school P.E for girls is a problem as women are not allowed to show flesh and therefore they will have to cover up and not wear uniform. ...read more.