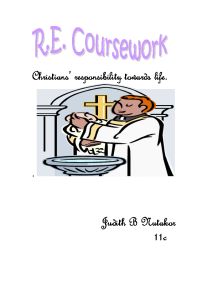 Christians' responsibility towards life. . Judith B Nutakor 11c 1. Explain the beliefs Christians hold about their responsibility for those at the beginning and end of their lives. Christian's belief life is a gift and a blessing from God because of scriptures, tradition and the teachings of Jesus Christ thus going to say they make them hold the responsibility for the beginning of lives. The belief in the sanctity of human life goes to explain Christians' belief that life is holy and should be kept sacred. Being created in the image of God tells Christians to hold and respect life seeing as it is one of God's gift to mankind is life and since gifts are not destroyed or prevented e.g. contraception. God, Christian's belief has relationship with each and every one of Christians. Jesus Christ was born so God could have a personal relationship through him to us. ''..., and he will be called Immanuel which means God is with us...''(Mathew 1:23) is the name God gave Mary to name Jesus whilst she was pregnant. As we are born sinners baptism is believed to be the cleansing of the human soul spiritually and is initiated into a child of God. These are examples of what Christians do to follow in the footsteps of Jesus. In Mark 16:6 the scripture says whoever believes and is baptized will be saved. They see this as away to gain eternity with Christ. In the bible God speaks of the body as his temple and goes to say he lives in us and that his temple should be kept holy. ...read more.

As written in the bible Christ says by his stripes we are healed. It reminds Christians of Christ being there for all of mankind. Lastly a person has more to life than others see, for instance if someone kills his brother he takes away from him all he or she had going, his happiness, properties and more. 2. Explain he different ways Christians respond to Contraception and abortion. Abortion is the intended removal of a baby during an early stage and contraception on the other hand is anything that aims to prevent a woman from becoming pregnant. In this section I will be explaining Christian's views on the two subjects. God created man to procreate. In the bible he commands them to have many children to fill the earth (Genesis 1:28). . When intercourse is mentioned in the bible it is usually followed by having a baby afterwards e.g. then Adam had intercourse with his wife and she became pregnant (Genesis 4: 1), '...he (David) had intercourse with her and, and she bore a son...' (2 Samuel 12: 24) etc. All these goes to explain one of the sole purposes of having intercourse is to bring forth descendants. Although there may be reasons a law of a country justifies one having an abortion be it a person raped, the foetus could be detected as being abnormal if allowed to develop, others could say they are not financially able to care for a child. Some Christians would not see this as reasons enough to avoid child birth. ...read more.