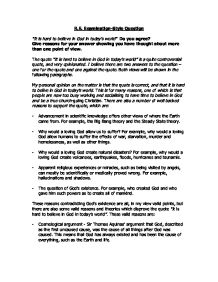 R.E. Examination-Style Question It is hard to believe in God in today's world&quot; Do you agree?

For example, hallucinations and shadows. - The question of God's existence. For example, who created God and who gave him such powers as to create all of mankind. These reasons contradicting God's existence are all, in my view valid points, but there are also some valid reasons and theories which disprove the quote "It is hard to believe in God in today's world". These valid reasons are: - Cosmological argument - Sir Thomas Aquinas' argument that God, described as the first uncaused cause, was the cause of all things after God was caused. This means that God has always existed and has been the cause of everything, such as the Earth and life. ...read more.

- The vast number of strong religious believers means that they must believe in something as why would they all bother believing in someone they knew didn't exist. The fact that there are so many arguments for and against the quote "It is hard to believe in God in today's world" means it must be a well discussed and argued topic. Personally, as I am an atheist, I still belive the quote is correct, but looking at the quote and the arguments for and against the quote from a neutral point of view, I can see that there is no clear right or wrong answer to whether God exists and to whether the quote is right or wrong. There may never be a clear right or wrong answer either. ...read more.