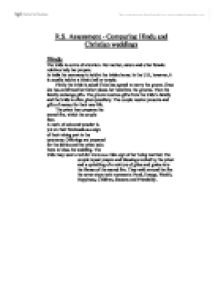 R.S. Assessment - Comparing Hindu and Christian weddings Hindu The bride is centre of attention. Her mother, sisters and other female relatives help her prepare. In India the ceremony is held at the brides home. In the U.K, however, it is usually held at a Hindu hall or temple. Firstly the bride is asked if she has agreed to marry the groom. Once she has confirmed her father places her hand into the grooms. Then the family exchange gifts. The groom receives gifts from the bride's family and the bride is often given jewellery. The couple receive presents and gifts of money for their new life. The priest then prepares the sacred fire, which the couple face. ...read more.

Christianity The things that the couple must be/have to get married: * A bride and groom who make certain legal statement * A witness * Someone who is authorised to conduct a wedding ceremony Like the Hindu weddings the bride is helped prepare by Female relatives and friends. Vows I (name of groom), take you (name of bride) I (name of bride), take you (name of groom) To be my wife (Husband) From this day forward, For better, for worse, For richer, for poorer, In sickness and in health, To love and to cherish, Till death do us part, according to Gods holy law, And this is my solemn vow. Then the priest declares that the couple are now man and wife and adds That which God has joined together, let man not divide. ...read more.

* Also another important aspects of a wedding ceremony is that the ceremony is legally performed by an authorised person. The couples prefer to have a church wedding as: * It is a traditional way to get married * Bride often describes it as the most important day in their lives so they want it to be special * To get married in the eyes of God Weddings: * Hindu weddings * Tilak (red dot) this may be worn by the bride to represent she is married * Pole Star * Sacred fire * Seven steps * Gifts of money or jewellery * Ghlee and grains * Powder/ paste * Christian weddings * Rings * Bride * Groom * Witness * Church * God * Vows * Authorised person to conduct the ceremony ...read more.