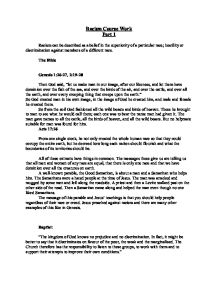 Racism can be described as a belief in the superiority of a particular race; hostility or discrimination against members of a different race.

Racism Course Work Part 1 Racism can be described as a belief in the superiority of a particular race; hostility or discrimination against members of a different race. The Bible Genesis 1:26-27, 2:19-20 Then God said, "let us make man in our image, after our likeness, and let them have dominion over the fish of the sea, and over the birds of the air, and over the cattle, and over all the earth, and over every creeping thing that creeps upon the earth." So God created man in his own image, in the image of God he created him, and male and female he created them. So from the soil God fashioned all the wild beasts and birds of heaven. These he brought to man to see what he would call them; each one was to bear the name man had given it. The man gave names to all the cattle, all the birds of heaven, and all the wild beasts. But no helpmate suitable for man was found for him. ...read more.

In fact, it might be better to say that it discriminates on favour of the poor, the weak and the marginalised. The Church therefore has the responsibility to listen to these groups, to work with them and to support their attempts to improve their own conditions." The Baptist statement mirrors one of Jesus' own teachings, the Beatitudes, one of which says: Happy are those who are persecuted in the cause of right; theirs is the kingdom of heaven. Or Happy are you when people abuse you and persecute you because of me and speak all kinds of calumny against you on my account. The Baptist church says that they have a responsibility to help the poor and persecuted. This is also like the Good Samaritan, or helping those less fortunate no matter what the colour or creed. Methodists "Whatever our skin colour or background, we are one in our common humanity and one in Christ." All are equal before God. Adverse discrimination on the basis of or cultural characteristics contradicts our common humanity and the Gospel. ...read more.

Recognition of diversity and complementarity should lead to respect for differences. 2. Charity and justice should be directed that everyone should be able to have dignified living conditions which should lead to a development of a fraternity. 3. This in turn should lead to effective solidarity between all races. The Roman Catholic Church states that there should be a 'brotherhood' of all races and that any charity should be equally divided so that everyone can have suitable living conditions (1 Corinthians). No Gentiles, no Jews, no blacks. The Catholic church has been opposed to racism for hundreds of years and denounces slavery. Unified Reform Church: "All humans are made in the image of God as the summit of God's creation. Human beings are made for each other, to live in community and to have corporate responsibility for the whole of creation. But unlike the rest of creation, there are no separate species within humanity. There is only one human race. What we call races are nothing more significant than slight variations of the basic human stock." "In Jesus Christ the barriers between humankind and God are broken down. Similarly the division within the human family are destroyed." ...read more.