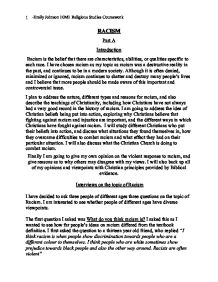 Racism. I plan to address the nature, different types and reasons for racism, and also describe the teachings of Christianity,

RACISM Part A Introduction Racism is the belief that there are characteristics, abilities, or qualities specific to each race. I have chosen racism as my topic as racism was a destructive reality in the past, and continues to be in a modern society. Although it is often denied, minimized or ignored, racism continues to shatter and destroy many people's lives and I believe that more people should be made aware of this important and controversial issue. I plan to address the nature, different types and reasons for racism, and also describe the teachings of Christianity, including how Christians have not always had a very good record in the history of racism. I am going to address the idea of Christian beliefs being put into action, exploring why Christians believe that fighting against racism and injustice are important, and the different ways in which Christians have fought against racism. I will study different Christians who put their beliefs into action, and discuss what situations they found themselves in, how they overcame difficulties to combat racism and what effect they had on their particular situation. I will also discuss what the Christian Church is doing to combat racism. Finally I am going to give my own opinion on the violent response to racism, and give reasons as to why others may disagree with my views. I will also back up all of my opinions and viewpoints with Christian principles provided by Biblical evidence. Interviews on the topic of Racism I have decided to ask three people of different ages three questions on the topic of Racism. I am interested to see whether people of different ages have diverse viewpoints. The first question I asked was What do you think racism is? I asked this as I wanted to see how far people's ideas on racism differed from the textbook definition. I first asked the question to a thirteen year old friend, who replied "I think racism is when people show discrimination towards people who are a different colour to themselves. ...read more.

Archbishop Desmond Tutu led the churches in opposition to the racial segregation brought about by government policies of apartheid. Apartheid had been introduced by the Nationalist party that had taken power in 1948, the objective of the party being to maintain the control of 4.5 million whites over 23 million blacks. Desmond Tutu refused to carry "the pass" and spoke out against the policies. He followed a strict belief in non-violence. When in other countries, Desmond Tutu called for economic sanctions against South Africa. Objective 2 Further details on two of these Christians I have chosen to explore deeper into the lives and works of Martin Luther King and Corrie ten Boom. Martin Luther King Life's most persistent and urgent question is: What are you doing for others? --Dr. Martin Luther King Jr. Martin Luther King was born on January 15, 1929, in Atlanta, Georgia. He experienced racial prejudice early on in life, which he reflected upon in his I Have A Dream speech in 1963, ""I have a dream my four little children will one day live in a nation where they will not be judged by the colour of their skin but by the content of their character." This reveals how he wishes that his children do not suffer the same prejudice he suffered in his life, he felt that he was always judged by his appearance not by his character. I can see that this is wrong, that everyone should be treated equally and make judgements based upon the inner person, not simply the shell that contains who a person actually is, yet I understand the frustration felt by King in that so few people were prepared to work to advance the position of black people. Throughout his education, King was exposed to powers which related Christian religion to the struggles of exploited peoples. At Morehouse, Crozer, and Boston University, King learnt the teachings on non-violent protest of Indian leader Mohandas Gandhi. ...read more.

Also, many people consider the idea that being a pacifist, would it be morally right to stand by and watch passively while their families or the weak suffered? I believe that pacifism cannot always get across as strong a message as violence can, many people have achieved good using violent means, for instance Malcolm X. Malcolm X was a black man who was described by his opponents as "violent," "fascist," and "racist." He used violent means to try to change the world that he had grown up in which was so full of racism and hatred. Although Malcolm X left no real institutional legacy, he did exert a notable impact on the Civil Rights Movement in the last year of his life. Taking a pacifist stance, I believe it would be the lesser of two evils to help somebody in need by using violence than sticking to my principles. If somebody was being hurt through no fault of their own, and I ignored the situation, I feel that I would be in the wrong, and disregarding the situation would be helping the person who was originally in the wrong by allowing them to continue what they were doing. Although I would never initiate violence, I believe that stopping violence is very important, even if this involves using brutality. If the situation could be overcome by negotiation then of course this would be the better choice of method, yet if I thought I would be able to overcome the aggressor myself then I would attempt to, whereas if I thought this would put me in unnecessary danger I would not attempt to and would think of an alternate manner to handle the situation, which could involve finding backup to subdue the assailant. The Bible could back up this point of view by using the quote "love thy neighbour" as the person who was being attacked could be seen as a neighbour, and leaving them without helping them would not be seen as a loving thing to do, counteracting the pacifist belief. ...read more.