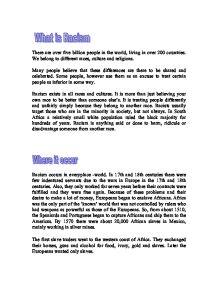 Racism. In South Africa a relatively small white population ruled the black majority for hundreds of years. Racism is anything said or done to harm, ridicule or disadvantage someone from another race.

There are over five billion people in the world, living in over 200 countries. We belong to different races, culture and religions. Many people believe that these differences are there to be shared and celebrated. Some people, however use them as an excuse to treat certain people as inferior in some way. Racism exists in all races and cultures. It is more than just believing your own race to be better than someone else's. It is treating people differently and unfairly simply because they belong to another race. Racists usually target those who are in the minority in society, but not always. In South Africa a relatively small white population ruled the black majority for hundreds of years. Racism is anything said or done to harm, ridicule or disadvantage someone from another race. Racism occurs in everyplace -world. In 17th and 18th centuries there were few indentured servants due to the wars in Europe in the 17th and 18th centuries. Also, they only worked for seven years before their contracts were fulfilled and they were free again. Because of these problems and their desire to make a lot of money, Europeans began to enslave Africans. Africa was the only part of the 'known' world that was not controlled by rulers who had weapons as powerful as those of the Europeans. So, from about 1510, the Spaniards and Portuguese began to capture Africans and ship them to the Americas. By 1570 there were about 20,000 African slaves in Mexico, mainly working in silver mines. The first slave traders went to the western coast of Africa. They exchanged their horses, guns and alcohol for food, ivory, gold and slaves. Later the Europeans wanted only slaves. The map below shows the slave trade Racism is something that affects everybody. Racists miss the opportunity to learn about other cultures and about people as individuals. Those who are being victimised may become racist back, as a way of dealing with what is happening. ...read more.

They cannot be classed as a racial or ethnic group because Muslims do not have a long, shared history; they do not have a particular place they all come from, and they do not share a common language or a common culture. Many feel quite strongly that the law ought to protect them as Muslims, not solely as people who happen to have dark skin. Mosques have been attacked, people get threats over the phone, abuse gets shouted at children, not because they are Asian but because they are Muslims. This may be changed because of the development. It may be that before long every European country has to have a law protecting people against discrimination on the grounds of their religion. This has to happen before 2006, and in Britain it may happen by 2003. Education ought to be the one area of life in which everyone is treated equally and has an equal chance, regardless of their race, religion, sex or the colour of their skin. Unfortunately, this is not the case. Many teachers still think that if pupils cannot speak English ' properly', they are unintelligent. Many Asian children speak another language at home and therefore have to learn English as a second language. Some West Indian children speak in a dialect in which teachers say is 'incorrect' or 'wrong'. These are extra barriers which black people have to cross in order to succeed. West Indian children fare worse in examinations than white and Asian children. Research has suggested that this may be partly caused by teachers who believe that children of different racial groups have different abilities. They do not expect West Indian children to do well. In 1983, there were about 800 black teachers in Britain out of a total number of over 450,000. Obviously we need more if all children are to be given a fair chance. The reasons people gave for prejudice were, in order of importance * The idea that minorities were taking jobs * Various ...read more.

I agree with this view because if you treat people horrible, why you aspect other people treat you nice. It should not matter what colour of skin you have or nationality, you should have the same treatment as others. Non-religious view " Racism is morally wrong and politically dangerous. It concerns us all. For if we divide our people by sex, by race or by nation. We all lose." Source: Declaration on Racial violence and Xenophobia agreed by European socialist leaders, June 1993 This view mean that Racism is wrong and it is dangerous too. It's wrong to divide people to race, sex and nation. But, if we do then, we all lose. I agree with this view because it's wrong to discriminate against foreigners we should all equal. Whatever your ethnic origin or race we should have the same rights and same treatment. People against Racism People who are against racism think that it does not matter where you from, what colour of skin you have, what nationality or ethnic origin. You should have the same treatment and same rights. People shouldn't discriminate against foreigners. People for Racism The racist think that people who have different colour and race are from different country, should all sent back. The Racist believed they could treat black people less than human being and force them to do all dirty work. The racist think that they are more clever than black people. What the racists say? The Racists say " Black and Asian come to our country and steal our jobs" My view is that it maybe true that the people come different country will have a jobs competition with British. But it's not mean that you can racism them because it is wrong to discriminate people and this is not the excuse for it. The Racist say "Foreigners are responsible for all the crime" My view is that this is not true because the majority of crime in Britain are from White people so this is not the excuse to discriminate people. ...read more.