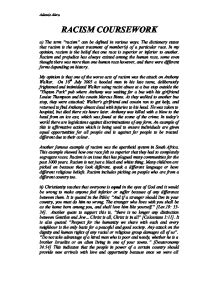 rascism. Throughout the issue of racism there have been people who put their beliefs into action such as the Quakers and Trevor Huddleston.

RACISM COURSEWORK a) The term "racism" can be defined in various ways. The dictionary states that racism is the unjust treatment of member(s) of a particular race. In my opinion, racism is the belief that one race is superior or inferior to another. Racism and prejudice has always existed among the human race, some even thought there was more than one human race however, and there were different forms depending on history. My opinion is that one of the worse acts of racism was the attack on Anthony Walker. On 30th July 2005 a hooded man in his late teens, deliberately frightened and intimidated Walker using racist abuse at a bus stop outside the "Huyton Park" pub where Anthony was waiting for a bus with his girlfriend Louise Thompson and his cousin Marcus Binns. As they walked to another bus stop, they were attacked; Walker's girlfriend and cousin ran to get help, and returned to find Anthony almost dead with injuries to his head. He was taken to hospital, but died there six hours later. Anthony was killed with a blow to the head from an ice axe, which was found at the scene of the crime. ...read more.

But if you show partiality, you are committing sin and are convicted by the law as transgressors" [James 2:8-9]. These quotes gave me the impression that as children of God we should show love to each other just as Jesus loved all of us by sacrificing himself to save all of us from our sins otherwise it would be considered lawbreaking. Bishops are also very passionate about racism and one of them said, "No one is born a racist. Racism is caught, learnt, taught, imitated and then practised. We must be converted into a Church which celebrates diversity, where our identities are not black, brown or white but are in the redeemed humanity in Christ". This indicates that all racist people have been raised to have prejudices against other races and everyone should become a Church which commemorates the diversity within ethnic backgrounds, where the colour of our skin is not relevant. b) Throughout the issue of racism there have been people who put their beliefs into action such as the Quakers and Trevor Huddleston. Even though Trevor Huddleston grew up not being exposed to racism he still decided to help South Africa and fought the apartheid system because he believed in love for your fellow man. ...read more.

He condemned apartheid as "one of the most vicious systems since Nazism". He said that the day that he was proved wrong would be the day that he would burn his Bible. In South Africa, apartheid was condemned by the World Council of Churches and the South African Council of Council of Churches declared it as "a false teaching which perverts Christian truth". Even though Desmond Tutu is generally a peaceful man, the situation with President Mugabe in Zimbabwe has caused Desmond Tutu to believe that violence would appropriate to tackle this problem because he believes that the situation has got out of hand and needs requires immediate action. In conclusion my view on this matter is that racism is one of the worst sins a person could commit because not treating people equally goes against Christianity, especially the commandment "Thou shall not murder" and also teaches us that the best thing to do in this situation is to show "agape" (the love of God or Christ for mankind). Finally, Jesus taught Christians that "those who live by the sword would die by the sword" and "you reap what you sow". This means, if a person uses violence to solve their problems their demise will be the result of their violent methods to solve problems. ?? ?? ?? ?? Adonis Akra ...read more.