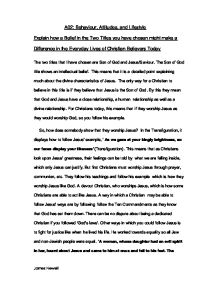 A02: Behaviour, Attitudes, and Lifestyle Explain how a Belief in the Two Titles you have chosen might make a Difference in the Everyday Lives of Christian Believers Today The two titles that I have chosen are Son of God and Jesus/Saviour. The Son of God title shows an intellectual belief. This means that it is a detailed point explaining much about the divine characteristics of Jesus. The only way for a Christian to believe in this title is if they believe that Jesus is the Son of God. By this they mean that God and Jesus have a close relationship, a human relationship as well as a divine relationship. For Christians today, this means that if they worship Jesus as they would worship God, so you follow his example. So, how does somebody show that they worship Jesus? In the Transfiguration, it displays how to follow Jesus' example, 'As we gaze at your kingly brightness, so our faces display your likeness'(Transfiguration). ...read more.

The woman was a gentile, born in the region of Phoenicia in Syria' (The Syro-Phoenician Women's Daughter) There are also many other ways in which a Christian can behave in their everyday lives like reading the Bible, so you would study it personally so that you can relate to it, and you could also be baptised, you would be following in the path of Jesus and becoming a devote Christian. But of course, many Christians have different beliefs about Jesus and about other things like baptism, whilst the Quakers and the Salvationists reject the idea of Baptism because they believe that you shouldn't have to prove yourself in these ways to God, other Christians accept the idea of baptising people as they believe that you should act like Jesus as best you can. Lastly, on the title of Son of God, Jesus, throughout Mark's Gospel shows his human and divine characteristics, so he shows how you should follow him and worship, but also at the same time Christians can relate to him when they are going through a troubled time in their life. ...read more.

Beliefs that Christians apply to their lives are contained in the Feeding of the 5000 and the Last Supper. These passages remind us of taking communion during mass as likewise some believe that you should act like God as best you can. The Syro-Phoenician Women's Daughter is also another example, this passage reminds Christians that they should not be prejudice, they should fight for justice and that they should spread God's message so that all can hear including Gentiles. So the way in which the two titles can affect a Christian's everyday life is by using both confess their sins, ask for forgiveness and ask Jesus into your life. These steps that some Christians decide to take show that they are in a real relationship with Jesus, and that he is your personal saviour. But the Son of God has a much more meaning about reality for other Christians as they have many problems in their lives in which Jesus can help. ?? ?? ?? ?? James Newell ...read more.