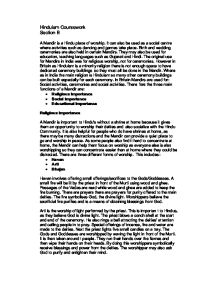 RE Coursework Section B - Hinduism

Hinduism Coursework Section B A Mandir is a Hindu place of worship. It can also be used as a social centre where activities such as dancing and games take place. Birth and wedding ceremonies are also held in certain Mandirs. They may also be used for education, teaching languages such as Gujerati and Hindi. The original use for Mandirs in India was for religious worship, not for ceremonies. However in Britain as Hinduism is a minority religion there is not enough space to have dedicated ceremony buildings so they must all be done in the Mandir. Where as in India the main religion is Hinduism so many other ceremony buildings can be built especially for each ceremony. In Britain Mandirs are used for: Social activities, ceremonies and social activities. Therefore the three main functions of a Mandir are: * Religious Importance * Social Importance * Educational Importance Religious Importance A Mandir is important to Hindu's without a shrine at home because it gives them an opportunity to worship their deities and also socialize with the Hindu Community. It is also helpful for people who do have shrines at home, as there may be many distractions and the Mandir can provide a quiet place to go and worship in peace. ...read more.

Being amongst others the same as you helps you feel like part of a community so you do not loose faith. In the Mandir youth clubs are ran on usually a weekly basis. This allows teenagers to go to a Mandir and socialize with other young Hindus. This then helps the person see that the Mandir can be fun and that other people are going with them. Educational classes also help people to make friends and feel accepted. However there are also things for older generations to go to. Senior citizens luncheon clubs are ran, allowing older Hindus to congregate and socialize too. This is important as it makes them feel valued as Hindus and that they are just as a part of the Hindu community as any other Hindu, young or old. By running things such as youth clubs and Senior Citizen Luncheons the Mandir promotes co-existence and unity, as all of the people who go to the Mandir come from different backgrounds. Some may have a wealthy family while others may not be as well off. Some live with their parents whilst other may be living with their aunts and uncles. The point is that no matter what your background is you're always welcome at the Mandir and nobody will judge you, as everyone is equal. ...read more.

You can also learn about religious festivals such as Diwali and Holi from the Mandir. These are important to know about the festivals and what they mean. For example Diwali is the festival of light. However it is not just fireworks. It is important that Hindus learn the stories and reasons behind these festivals, as they are an important part of a Hindus lifestyle. By using a more 'hands on' approach it helps people learn easier, especially with younger people. Instead of just sitting learning about Hindu stories, teachings, children find it much more engaging to actually do them. So rather than just sitting learning about them, actually going to do them. This is where the Mandir is so important as a cultural centre. Rather than just being a place to socialize it is a place where Hindus can have fun and learn in a hand on approach. This is why it is so important to have the Mandir as a cultural centre because it not only brings the Hindu community together but it educates younger Hindus in fun ways (plays, dances, music etc), as well as educating them properly on Hinduism and Hindu ways of life in general (Priests, special lectures from visiting holy men, swamis). ...read more.