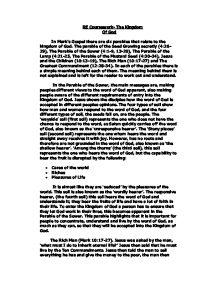 RE Coursework- The KingdomOf God

RE Coursework- The Kingdom Of God In Mark's Gospel there are six parables that relate to the kingdom of God. The parable of the Seed Growing secretly (4:26-29), The Parable of the Sower (4:1-9, 13-20), The Parable of the Lamp (4:21-25, The Parable of the Mustard Seed (4:30-34), Jesus and the Children (10:13-19), The Rich Man (10:17-27) and The Greatest Commandment (12:28-34). In each of the parables there is a simple meaning behind each of them. The meaning behind them is not explained and is left for the reader to work out and understand. In the Parable of the Sower, the main messages are, making peoples different views to the word of God apparent, also making people aware of the different requirements of entry into the Kingdom of God. Jesus shows the disciples how the word of God is accepted in different peoples opinions. The four types of soil show how men and women respond to the word of God, and the four different types of soil, the seeds fall on, are the people. The 'wayside' soil (first soil) represents the one who does not have the chance to respond to the word, as Satan quickly carries off the word of God, also known as the 'unresponsive hearer'. ...read more.

By using talents, we may be encouraging others around us. By encouraging others we are helping to build the Kingdom of God. The Parable of the Growing Seed (Mark 4:26-29). This parable highlights the idea that the faith is like a growing seed, within time it will grow into a big tree. Then later will bear fruit, the same idea that peoples' faith is growing and building up, and eventually it will bear fruit. This is one of the things that helps build the Kingdom of God. An allegory is a narrative picture or other work of art intended to be understood symbolically. The messages are said to be hidden in some form of code. A parable is a short story illustrating a moral point; they are simple short stories which are easily understood. Examples of allegories from marks gospel include: Mark: 2:18-22, Jesus questioned about fasting. Mark 7:24-30, the faith of a syro-phoienician woman, about children being fed first, and dogs second. Mark 8:11-21, Jesus feeds the 4000. Bread is an expression of teaching of Christ. Examples of parables used in marks gospel are: The Parable of the Sower, in this parable the moral of the story is, to trust god and that it you put all your faith in him then you will bear fruit, and enter the Kingdom of God. ...read more.

Also, disasters such as the 9/11 attack, to see people from one country falling to such drastic measures to attack people from another country, is not what God wanted for the Kingdom of God. Also, they may think that not enough people follow and have understanding about Gods word, and the Kingdom of God. For example, in the parable of the lamp Jesus tells the disciples not to hide their faith or to be ashamed of it, this does not, unfortunately happen in the world today. Also, in the rich man parable, Jesus tells the man to sell all his riches, this is because he believes they mat get In the way of there faith and beliefs. However, today riches do get in the way of peoples faiths, and they probably would not be willing to give up their riches and possessions just to follow God. Examples, of the world being God's Kingdom include: people such as nouns, priests and aid workers, all these people give up their lives and time to look after those less fortunate than themselves. This shows that God's word had been thought about carefully and understood by these people. I think that God is very proud of the world, although it is not perfect and not everyone follows his word, there are a lot of people who are willing to give up their lives for God and what he tells people. ...read more.