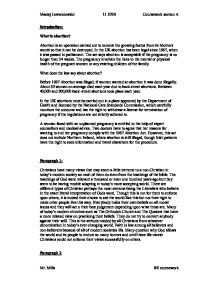 Abortion is an operation carried out to remove the growing foetus from its Mothers womb so that it can be destroyed. In the UK abortion has been legal since 1967, when it was passed in parliament. The act says abortion is acceptable if the pregnancy is no longer than 24 weeks. The pregnancy involves the risks to the mental or physical health of the pregnant women or any existing children of the family.

What does the law say about abortion?

In the UK abortions must be carried out in a place approved by the Department of Health and licensed by the National Care Standards Commission, which carefully monitors the outcome and has the right to withdraw a license for termination of pregnancy if the regulations are not strictly adhered to.

A woman faced with an unplanned pregnancy is entitled to the help of expert counsellors and medical advice. Two doctors have to agree that her reasons for wanting to end her pregnancy comply with the 1967 Abortion Act. However, this act does not include Northern Ireland, where abortion is still illegal, though Irish patients have the right to seek information and travel elsewhere for the procedure.

Christians have many views that may seem a little extreme to a non-Christian in today’s modern society as most of them do stem from the teachings of the bible. The teachings of God were relevant a thousand or even one hundred years ago but they seem to be having trouble adapting in today’s more accepting world. There are different types of Christian perhaps the most extreme being the Literalists who believe in the exact literal interpretation of Gods word. Though this is not for them to enforce upon others, it is indeed their choice to see the world like this but not their right to make other people live this way. Everybody holds their own beliefs on all moral issues and they will act o their best judgement depending upon what these are. Many of today’s modern churches such as The Orthodox Church and The Quakers that have a more relaxed view on practicing their beliefs. They do not try to convert anybody against their will. This is the attitude needed by all Christians from whatever denomination in today’s ever-changing world. Faith is low among all believers and non-believers because of all of modern societies ills. Many question why God allows the world and its people to endure so many horrors and until these ills vanish Christians could not enforce their views successfully on others.

Christians also have the responsibility of not creating that life if there was no will to do so. The Roman Catholic Church defines sex as something that should be abstained from unless it is to create another life. They do not agree with any form of contraception, as conception is natural law. 1 Corinthians 6:18-20 encourages us to not have sex as our body is the temple of the Holy Spirit and we should worship it. But it is our duty to carry on the human race and reproduce, so sex in order to recreate is fine as stated in the bible. ‘So God created man in his own image, the image of God created him, male and female’ (Genesis 1:26-27). It is a Christian’s responsibility to carry on this precious thing but it should also be their duty to protect it.

The Church of England

The Church of England have a certain criteria regarding the acceptability of abortion:

·        The mother must seriously consider her actions and the implications

·        Where handicap is a reason, this is only justified if the child is likely to die at birth or shortly after

“I am not an absolutist. I recognise that there are situations where abortion is right.”

Circumstances that may often justify an abortion are direct threats to the life or health of the mother, or the probable birth of a severely abnormal child. The woman’s environment should be considered, including children for whom she is already responsible and offensive social conditions of bad housing and family poverty